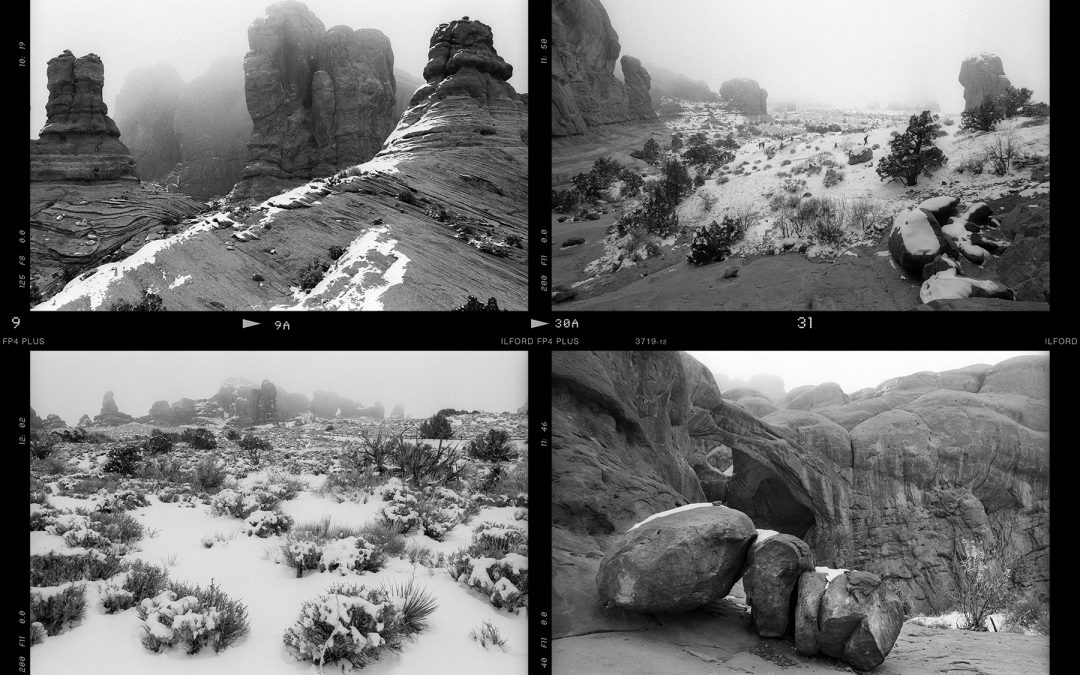 Having just returned from a long weekend to Arches National Park, I’m beginning to work through my film. Shot a good bit of 35mm and 120, both color and monochrome this trip, keeping with my New Year’s ‘goals’: shoot more film, drink more whiskey. Did both, it turns out – but shot more film than whiskey, largely dividing time evenly between 4 cameras: 2 x medium formats and 2 x 35mm. Since retiring my D3s I’ve added the F5 back into heavy rotation and am loving working with it again.

If you want to see one of America’s true treasures, visit Arches National Park in Utah. If you want to see it at a special time of year, and when there are (far) fewer people – try visiting in January. In much of the Park I was alone, and it was wonderful.

The F6 saw heavy use. I continue to be pleased with its performance (after more than 10 years), even in the cold. Of all my cameras it’s still the king of metering and perfect exposure. Having just replaced the batteries with fresh AA’s (went with Duracell’s new “Optimum’s” (“Extra Life. Extra Power” is the slogan). In 20° temps they registered down 1 tick on the top plate indicator so I slipped out the MS-40 and kept it in an inner jacket pocket until ready to shoot. No problems after that.

For 35mm, ran some FP4+, of course Delta 100 as well as some new Ektachrome and expired Provia. Ran mostly E-6 through the F5 this trip, largely relegating the F6 to monochrome. Both use Kirk L-brackets so getting them on and off the tripod is fast and easy. The color medium format work can be seen on Blue Hour Journal soon.

The vast scale of the land is hard enough to communicate through small photographs on the internet. But everyone knows a human figure when they see it.

As is evident – there was no sky the whole trip. Just a huge, grey wall behind every horizon line for 4 straight days. This made shooting wide difficult, and encouraged tunneling in more, cutting the horizon completely out of most images. There were times just enough depth showed through to indicate something in the background, and in that case it stayed. But largely, this was a horizonless shooting experience.

I found this tree fascinating, and the small, frozen berries against the gnarled, twisted trunk communicated delicacy against a tortured harshness unique to Arches. I do think, however, this image will wet print better than it scanned/displayed digitally. There’s a lot of detail/information here and controlling contrast is going to be important. One of the great things about FP4+ is slightly less contrast than Delta, allowing contrast to be built up slowly using multi-grade filters.

Next up is the color work. Thanks to Denver Digital Imaging for processing my color films. Couldn’t do it without you guys.