by John Crane | Nov 22, 2014 | Destinations, From the Past, Inspiration, Places, Vintage Nikon 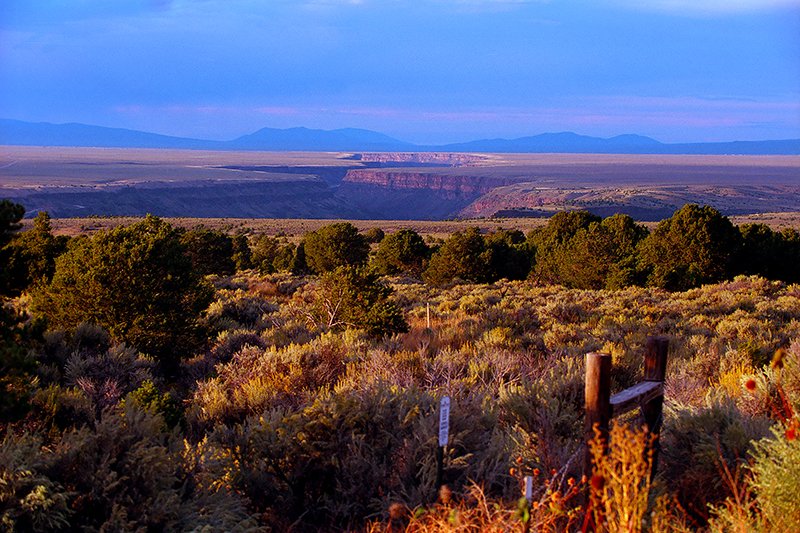 One of my great joys in life is driving; to simply wander and explore with a camera; and once in a while to answer that perennial question – what’s down this road, or around the next bend? The drive from San Luis, Colorado to Taos, New Mexico has to be one of the most beautiful drives. Ever. When we lived in Santa Fe returning to Colorado was always a highly anticipated event – largely for the road trip. Sure, you can hop on I-25 and be door-to-door a few minutes faster, but that’s rarely the point.

159 south out of San Luis turns into 522 as you cross the New Mexico state line. The route is dotted with piñon pines – like beard stubble on a giant face – framing broad, sweeping vistas. Active skies hover weightlessly above distant mountain ranges toned by years of erosion and gnarled, stunted flora on this flat stretch of road passing through the southern region of the San Luis Valley. To the East the Spanish Peaks rise abruptly from the valley floor. To the west lies distant Kit Carson National Forest, home of Abiquiu and Georgia Okeeffe’s Ghost Ranch. The beauty of the area is understated during afternoon’s high angle light hours. Not quite desert – not quite mountains – the land can come across as harsh, unforgiving terrain void of life. 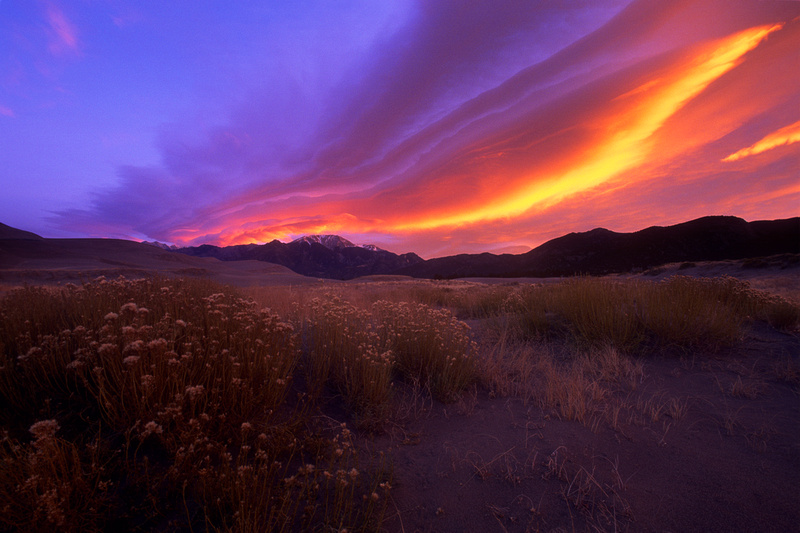 Towards the edges of the day, however, a softness emerges completely altering the same landscape in etherial beauty; the tones of distant ranges shifting from undifferentiated grays to subtle ochres, siennas, cadmiums, cobalts and indigos – and skies with supernatural color beyond comprehension. Dirt roads vanish into oblivion, pointing at no obvious destination save a clump of trees on the distant valley floor. A service road to a watering station for cattle? A driveway small children need to walk a half-hour to catch a bus on? One day – with a full tank of gas and plenty of film – I’ll discover where these roads lead. But today’s not that day. As is often the case when we hit this part of the drive it’s mid/late in the afternoon and the light isn’t so great – but only a photographer would complain about it. To pass through this land in the mornings and evenings is well worth the effort. 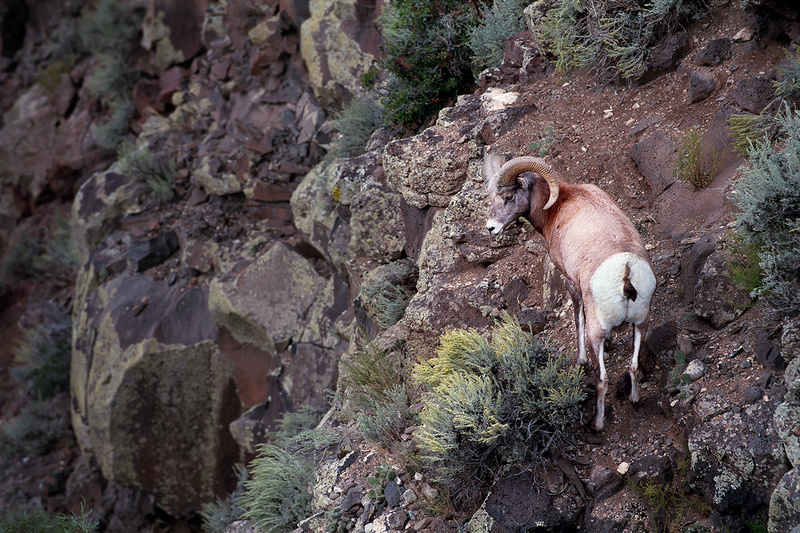 In your rear view mirror you’ll see the impressive Sangre de Cristo range towering on the northern horizon, anchored by the ominous and deadly Blanca Peak, one of the most notorious “Fourteeners” in Colorado. For those who don’t know, Colorado is home to all 53 peaks in the Rocky Mountain chain – from Canada to Mexico – that rise above fourteen thousand feet in elevation. Near Fort Garland, Colorado the Sangre de Cristos hook to the east slightly then continue south into northern New Mexico where they melt back into the surrounding hillsides and rolling arroyos above the town of Santa Fe. 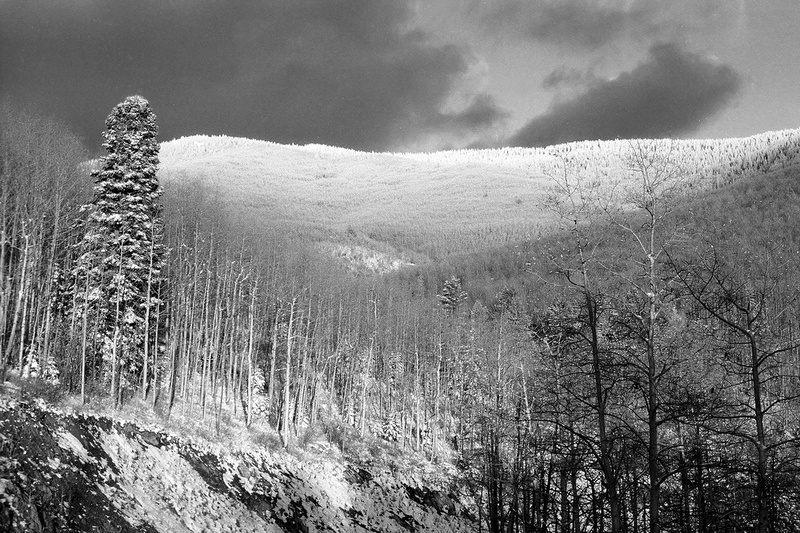 From a photographer’s point of view the land presents virtually endless compositions – but can be tricky for the landscape photographer to actually frame something up. Often times there’s little more than a horizon and sky to work with. Occasionally you’ll have something of foreground interest; an unusual roadside shelter, an old tractor abandoned along the road, a derelict mobile home trailer parked in a field, or towers of neatly stacked, freshly baled hay. For shots like this – where there’s less of an immediate object to focus on and the image relies more on faithful representation of subtle detail – I’ll switch to a fine-grain, high resolution film like Ektar, (or Velvia/Provia when I was shooting more chrome films).

The town of Questa, New Mexico is the next “major” town along the route. One of Questa’s claims to fame is its honey production. Long about the time we hit Questa, we’re hungry. Last summer we decided to uphold our tradition of avoiding chain restaurants and dining instead at locally owned establishments. This led us to WildCat’s Den in Questa. I’ll be honest… at first I was a little skeptical about bringing my family into this sketchy looking establishment, with bars on the windows. The WildCat Den sounded like something other than what it turned out to be – pure and simply, home of one of the best burgers in northern New Mexico.

We burgered up, chatted with the cooks and headed out. If you ever find yourself wandering through Questa hungry, make sure you hit the WildCat’s Den. Don’t be fooled by the bars on the windows – they’re to keep the burgers in – not the people out. 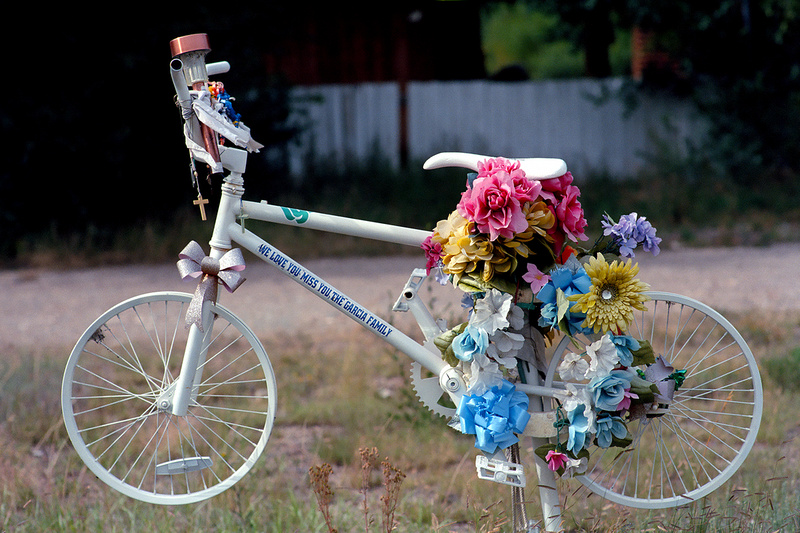 South of Questa, the only signs of life are the small, mountain enclaves of Arroyo Hondo, San Cristobal and El Prado. At night this drive can be harrowing, evidenced by the abundance of one of my ongoing fascinations – roadside memorials  – dotting the route. Unfortunately in New Mexico you see a lot of them. On the way out of Questa we passed this especially poignant one I couldn’t help but stop at. 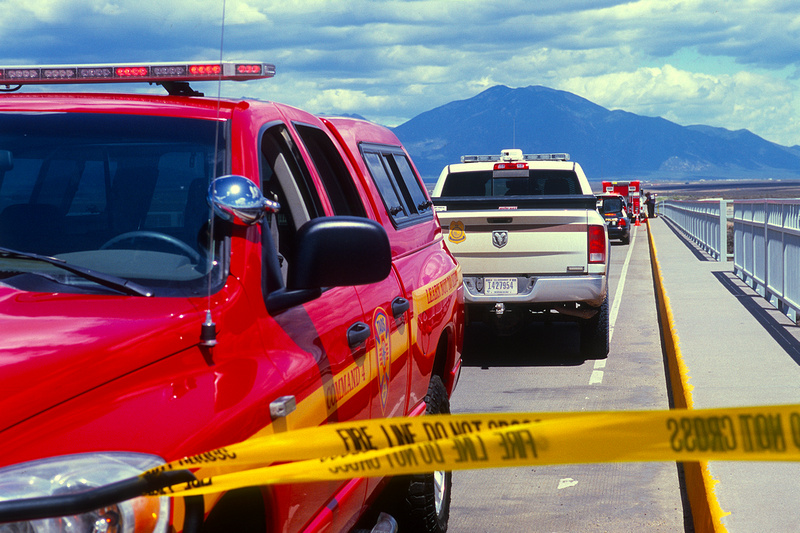 A big draw in Taos is the Rio Grande Gorge Bridge. At 650 feet above the river below it’s spectacular – and easily accessible – spanning the Rio Grande Gorge just a few miles west Taos on Highway 64. Unfortunately its accessibility has become an issue for those wishing to use the bridge to end their lives. Jumpers off the Rio Grande Gorge bridge number 115 in the last 20 years. When we were there last August another person had recently jumped to their death. Emergency vehicles blocked access to the side of the bridge thus thankfully preventing the view to the body below. The knowledge it had just been discovered moments before we arrived temporarily erased the light-hearted spirit being on vacation inspires. 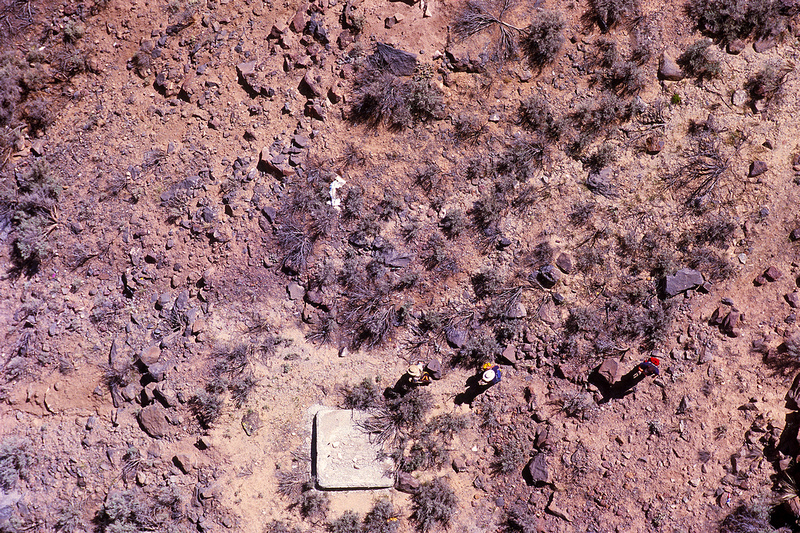 Emergency workers make their way down perilously steep canyon walls to reach yet another body, a victim of suicide by jumping off the 650 foot bridge (August, 2013).

That’s quite enough talk about roadside memorials and people jumping to their death. Fortunately on this trip no such events preceded our arrival. Instead we were met by these guys (below image). I’ll take them over the other any day of the week. There were several different groupings of big horns along the east side of the canyon. The rams huddled together along the rim while the mommas with their kids dotted the cliffs below. 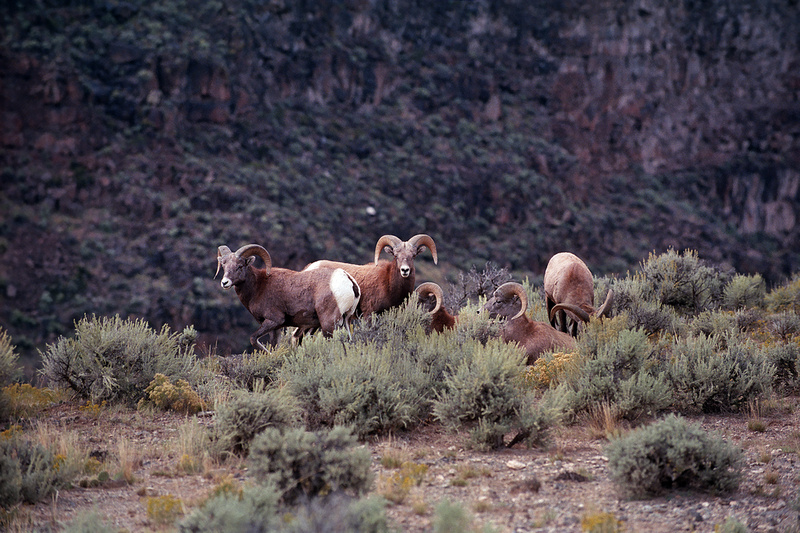 The F6 was the obvious choice for these images of Big Horns because of its VR capability. Afternoon light was beginning to dwindle and though they were relatively close on the canyon rim – 200mm closed the gap. Pushing Ektar one stop to ISO200 set the 70-200VR up for success with a comfortable working combo of ƒ5 at 1/400. The 70-200mm VR is a great lens but experience has taught me to not expect greatness for shots like this at ƒ2.8. No time for a tripod – everything was hand held. The F4s stayed in the car for this outing, not wanting to fumble with additional gear while changing film. He would have his chance to shine later. 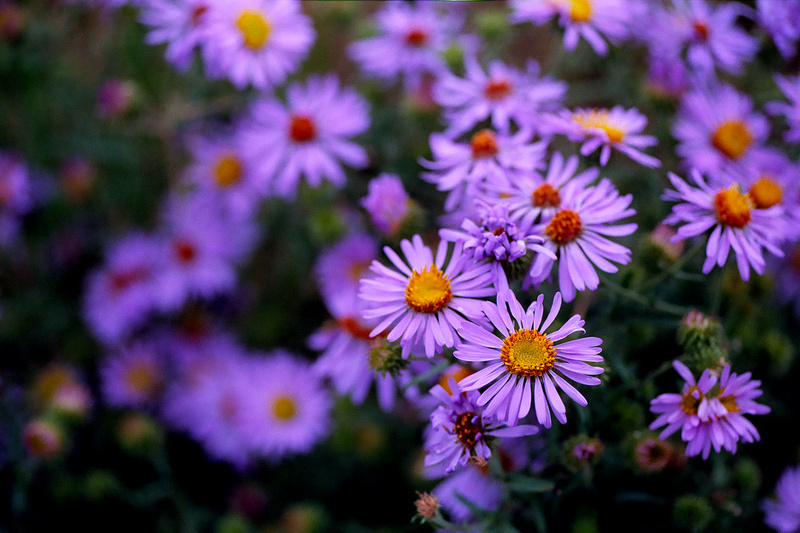 Old Jeep Willys Pick up truck living out the rest of its days as a planter, Taos, New Mexico (2013)

By the time we arrived in Taos we were ready for a longer break. Less populated and more mountainous than Santa Fe, Taos is a town of notoriety and size, standing unique in the regions’s art community. The hearty traveler could spend a lifetime exploring Taos and surrounding area. You never know what you’ll find winding through town on back alleys rather than being stuck in traffic on the main road. This old, turquoise Jeep pick up truck appears to be blessed living out its remaining days as a planter in someone’s front yard.

The Taos art community is world renown, spanning generations with heavy hitters like Georgia O’Keeffe, Frederic Remington, John Sloan, Marsden Hartley, E. Martin Hennings and Walter Ufer. Today, famous artists such as Charles Collins and so many others line the plaza with unique, inspiring art. Something about being around art makes you want to create art with the camera. For me that’s what our trips to New Mexico are all about – and the fun was only just beginning.

“Lincolns Union” is a “Master Mind” sculpture created by Charles Collins – a bonafied “Master” from Taos, New Mexico (2014). The sculpture is composed of three, individual pieces that stand on their own, representing the Union solider, the Confederate solider and “the woman who held the flame of hope for both.” When reconfigured they form a unique, new shape resembling Lincoln’s face.

I could go on and on about Taos – but we’d never get to the next destination: Santa Fe. Coming up next, the Art Epicenter of the United States, Santa Fe, New Mexico. Thanks for sticking with me this far. The real fun is about to begin.