Well that’s a little embarrassing… I just checked this page and there were a bunch of broken links. Sorry about that. I’m in the process of updating so please bare with me. 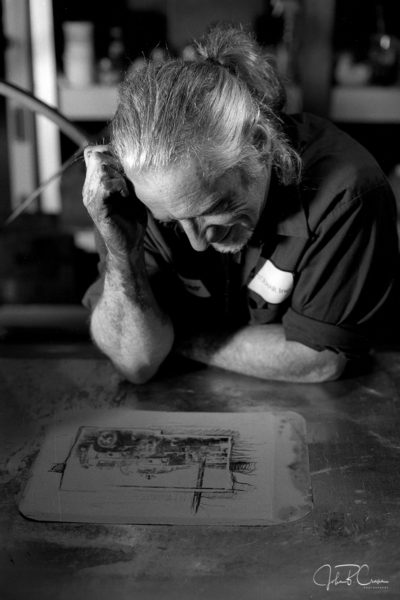 Black and White film: favorite emulsions and their characteristics

If you’re going to shoot a film camera you need to consider what film you’ll be running through it. The choice of film is perhaps the single most important influencer on your images. Numerous options appeal to whatever  your creative intent is. Understanding which films possess which characteristics is important.

The below is a brief breakdown of various emulsions and why one might choose to use them. Something I encourage is experimentation. 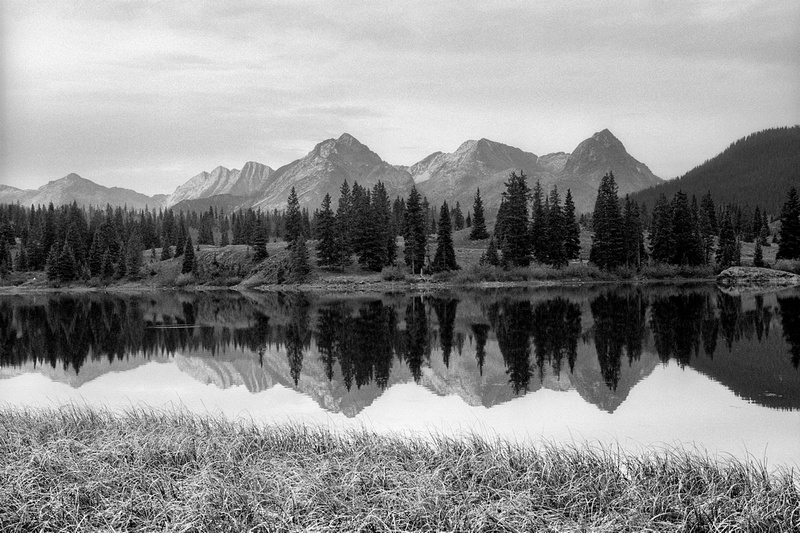 Every photograph is an interpretation of a scene. Therefore the tools with which one interprets that scene with will have a hand in directing the final image of that scene. Some people I talk to “always shoot ??? film” – I understand why: processing, standardization of chemicals, developent times and tempertures, scanner settings, etc., But I’ve really enjoyed different emulsions that yield different interpretations of a scene.

Consider this information as input with which to make your own creative decisions and always remember it’s not an objective choice (one that has an absolute right or wrong answer), but a subjective choice (subject to what you prefer). [full disclosure: these images were made with a variety of Nikon cameras – including the Nikon F4S, Nikon F5 and Nikon F6 – and Nikkor lenses. Some images in the slide show above were made with the Mamiya RZ67 medium format film camera, on the same emulsions listed here].

Following are a few unscientific observations: 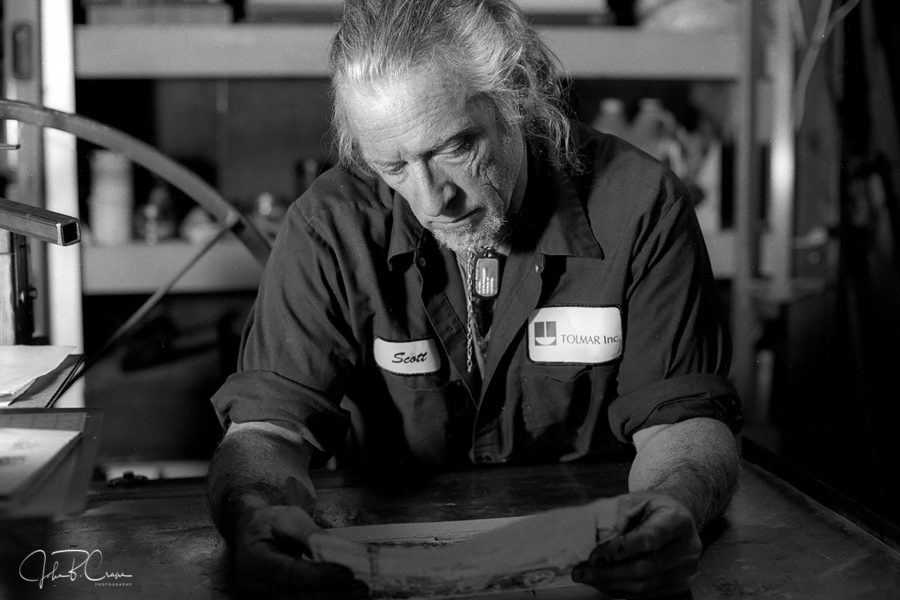 PanF is my new favorite film.

ILFORD PAN F PLUS is a slow speed, high contrast, black & white film offering exceptionally fine grain, sharpness and detail. Suitable for bright conditions from sunny days to controlled studio lighting. It suits subjects ranging from architecture and still-life to portraiture and fashion. PAN F PLUS is perfect for enlargements as negatives show an outstanding range of tone, high-edge contrast and extreme sharpness. It is therefore also suitable for a range of specialist or scientific applications such as photomicrography or the production of black and white slides. PAN F PLUS can be processed in a wide range of different developers using spiral tanks, deep tanks and automatic processors. 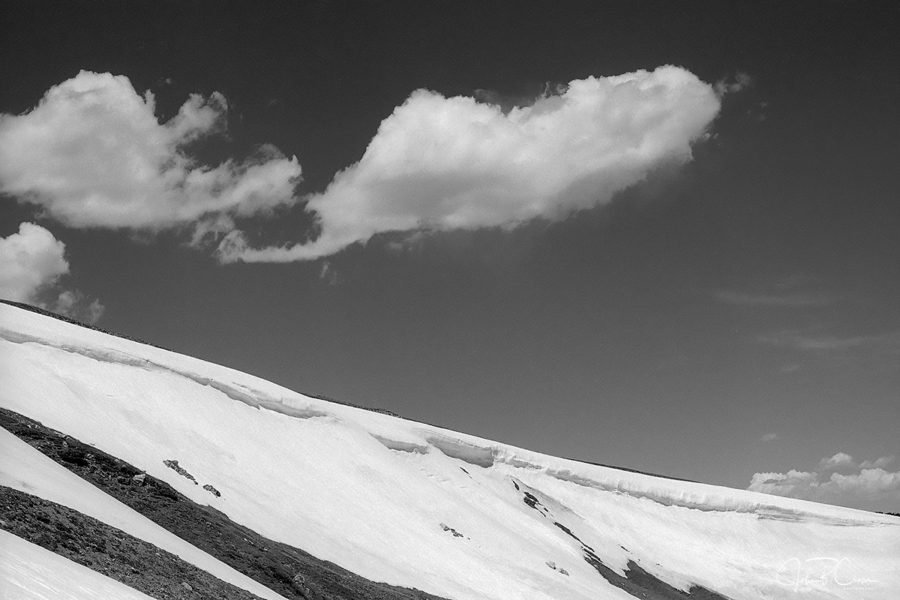 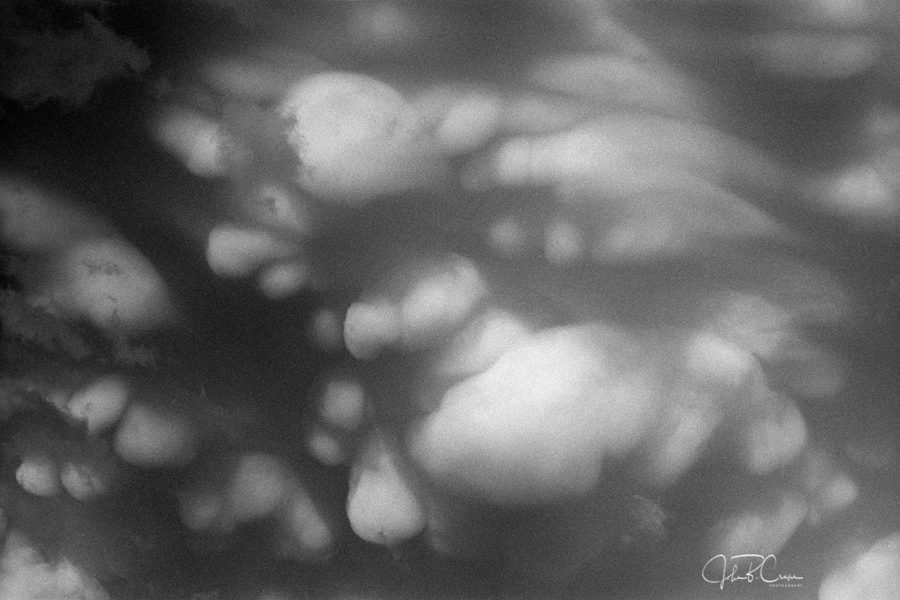 Delta 100 is my second favorite black and white film. Remembering that a photograph is an interpretation of a scene, Delta is one of the most vivid mediums with which to interpret. I love the punch (contrast) of Delta 100/400, that has a dramatic look people either tend to love or hate. Blacks are deep and pronounced, whites are vivid, and it’s super smooth. There tends to be a sharper fall off in mid-tones and this is what creates the drama.

Beginning in 2016 I am developing my own film again. One of the main reasons for this is Ilford Delta in DDX developer. The lab I used to use – excellent as it was – ran TMAX RS developer. When ever I got my films back and started working with them I was disappointed. DDX developer  produces – for me – the perfect black and white negative with which to either print in the enlarger or scan. It was formulated specifically for the Delta line of films, and when you run it at rated speeds it’s turn-key. “For sharpness and freedom from grain, ILFORD DELTA 100 PROFESSIONAL is simply the best in its class – offering the photographer exceptionally fine grain and a level of sharpness rarely seen, resulting in outstanding clarity of detail and the most precise image rendition. Capable of superb image quality at its recommended rating of ISO 100/21, this film will also produce great results rated between ISO 50 and 200.”  [Link to Ilford’s product sheet]

Something I’ll be experimenting with shortly is Delta 100 in Rodinal, and Stand Developing for super high contrast negatives that may benefit from more dilution and longer developing times. I’ve been reading up on Stand/Semi-Stand Developing and find it intriguing. We’ll see how it turns out. If successful, I’ll do a write up about it here. 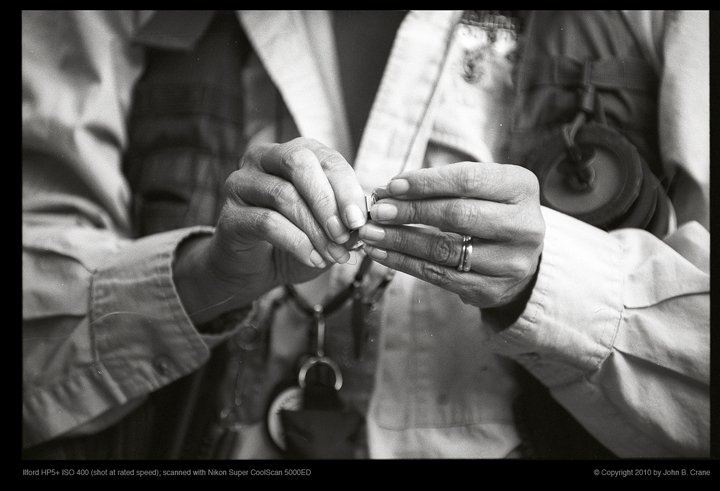 Kodak’s TMAX has a smooth, tight grain barely noticeable producing beautiful gradations. I find it excellent at representing gentle, subtle tonality in a photograph that produces a richly detailed image. I’ve shot some of my favorite pictures on TMAX and really love the gentle mid tones it yields. Sometimes I’ll need to boost the contrast in Photoshop with levels to get it perfect to my eye. I have not pushed or pulled TMAX so can’t speak to how well it handles it, but shot at its rated speeds has produced very nice results for me. [Link to Kodak’s product sheet]

To those of you who are asking what pushing and pulling is, it’s shooting the film at a different speed rating than what it was intended. For example, if you shoot ISO400 film at ISO800 instead, and process it for ISO 800, your pushing the film. If you shoot it at 200 and process for 200, you’re pulling it. Why would you do this? Reducing or increasing contrast is one reason, not enough light or too much light is another.

“When John Sexton sought to test a 400-speed film, he looked to the new KODAK PROFESSIONAL T-MAX 400 Film, now the sharpest 400-speed black-and-white film in the world, in addition to being the finest-grained.The KODAK T-GRAIN Emulsion of this high-speed, highly detailed film gives Sexton all the power he needs to expose the true purity of his environment.” Faithful representation of subtle tones is one of TMAX400’s great strengths. [Link to Kodak’s product sheet] 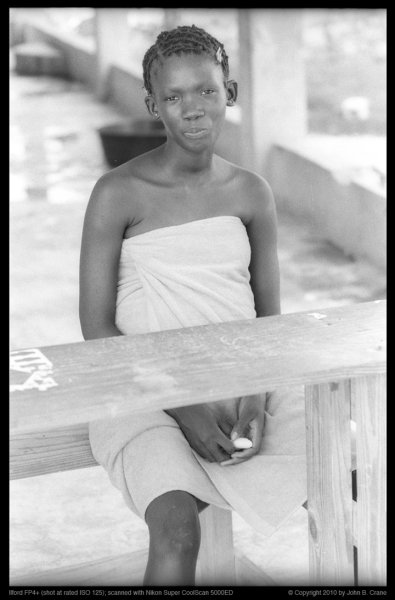 “A beautiful, tight, fine-grained, rich toned film. For high quality black and white photography, ILFORD FP4 PLUS is unrivalled. Its very fine grain, outstanding sharpness and high acutance make it the film of choice whenever a job demands great enlargement or the subject contains a wealth of fine detail. Nominally rated at ISO 125/22, ILFORD FP4 PLUS has become the benchmark against which other medium speed films are judged. With enormous latitude for exposure error above and below its ISO 125, ILFORD FP4 PLUS is very suitable for most photographic subjects under a variety of lighting conditions.” At 125 it seems to provide a little more punch than TMAX while maintaining gentle mid tones and the grain structure is so lovely and smooth. Ilford’s FP4+ has been a mainstay of black and white shooting for years. It scans well, and provides a full range of tones while not clipping highlights or burying shadows.

“HP5 PLUS is a high speed, medium contrast film making it especially suitable for action and press photography and also an excellent choice for general purpose photography. Nominally rated at ISO 400, it yields negatives of outstanding sharpness and fine grain under all lighting conditions. HP5 PLUS has been formulated to respond well to push processing and film speeds up to EI 3200/36 are achievable with ILFORD MICROPHEN developer maintaining good shadow detail and well separated mid-tones with sharp grain.” I really like this film for general purpose shooting, but think I don’t like the grain structure quite as much as TMAX. It’s not quite as smooth. Still has a nice, even, unique look, that’s pleasing. [Link to Ilford’s product sheet] 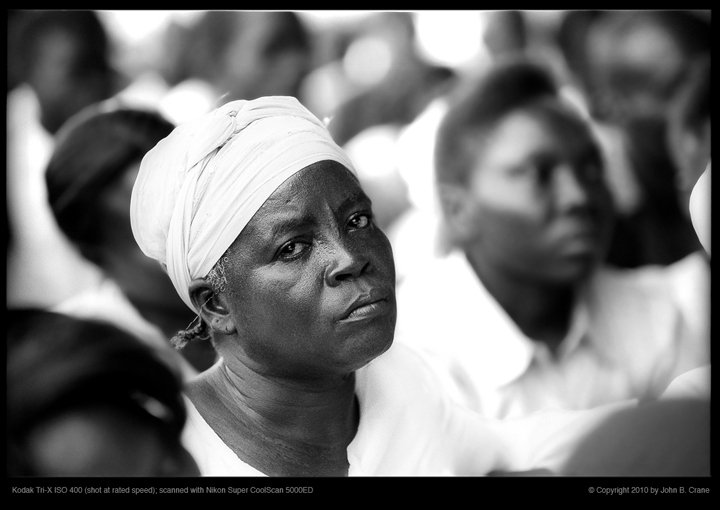 “The world’s best selling black-and-white film.
Sebastião Salgado has long relied on KODAK PROFESSIONAL TRI-X Film to express the human condition as he sees it. This classic black-and-white film allows for maximum pushability when he needs it, while its wide exposure latitude lets him leverage even the most challenging lighting situations. And the distinctive grain structure adds a level of realism as dramatic and profound as each subject.” Tri-X is a classic I’ve recently revisited and am really liking what I’m seeing. Nice, inky blacks and again a richness that somehow completes the frame. [Link to Kodak’s product sheet] 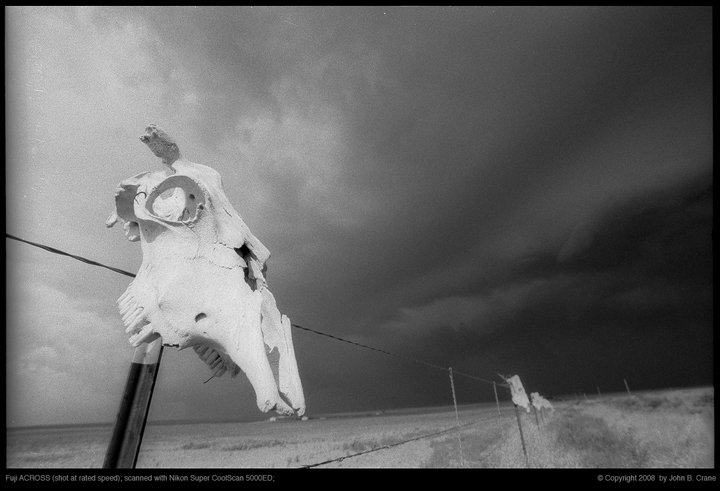 Near Briggsdale, Colorado. Fuji Neopan Across at ISO100

“Neopan 100 Acros is Fujifilm Professional’s newest addition to its black-and-white family of films. Neopan 100 Acros is a medium speed, ultra-high-image quality black-and-white negative film and features the world’s highest standard in grain quality among ISO 100 films.” Love this film. There’s a inky richness to it that I really like. [Link to Fuji’s product sheet] 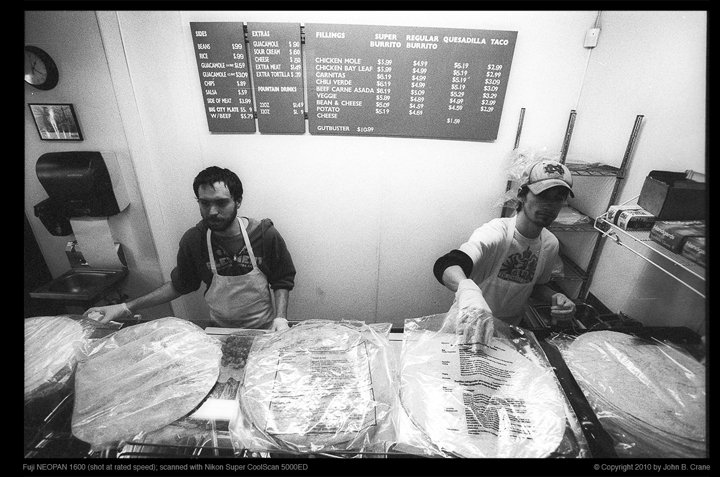 “A high-speed, ISO 1600 black-and-white film. Designed for rapid auto-processing, processing time is equal to that of Neopan 400, allowing the two films to be processed simultaneously.” Same as above. Really love the inky look it produces. The rough grain goes with the territory and if you’re shooting Neopan or Delta 3200, you’re probably in it for the grain. [Link to Fuji’s product sheet] 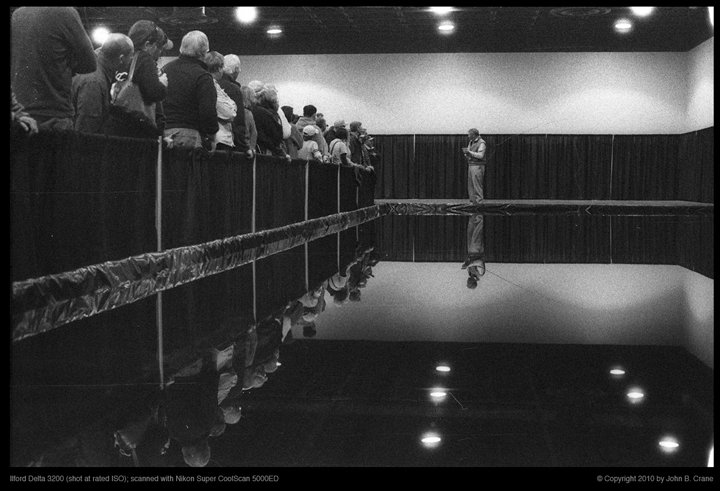 Denver Fly Fishing Show, Denver, Colorado. Ilford Delta 3200 has a look all its own.

“DELTA 3200 PROFESSIONAL is an ultra-speed black and white film, ideal for fast action and low light photography such as night time, sport, or indoor architectural applications where flash photography is ‘forbidden’. This is a genuine high speed film with an ability to record highlight detail that sets it apart from other films. ILFORD DELTA 3200 PROFESSIONAL has many strengths, most notably its liberating high speed, unobtrusive grain structure and its unsurpassed tonality.” Delta 3200 is about as gritty and gnarly as you can get in an off-the-shelf emulsion. It’s all about grain and contrast with 3200 and you either love it or hate it. I love it. [Link to Ilford’s product sheet]

I use the Nikon Super CoolScan 5000ED and it comes the closest to what I want to see after a good bit of experimentation with the settings. I’ve looked at Silverfast, but think it’s over priced and not capable of enough extra to warrant the cost for me. I have heard great reviews of it, however. But I don’t know if it’s because people spent so much for it they feel they need to love it.

My process is quite slow. I don’t scan every frame from a roll, just the ones I want to work with. For that the negative strip adaptor works just fine. I also have the Epson V500 for my MF work and have been pleased with its performance on MF work because I can scan it in so large, then downsample and tighten things up. But haven’t done much 35mm strip scanning of negs. I’ve also gotten scans from the lab at processing and they are better, though a bit aggressively USM’d, but they print at 4×6 extremely nice. So I too am searching for the perfect BW film/workflow combination but feel I get a little closer each year.