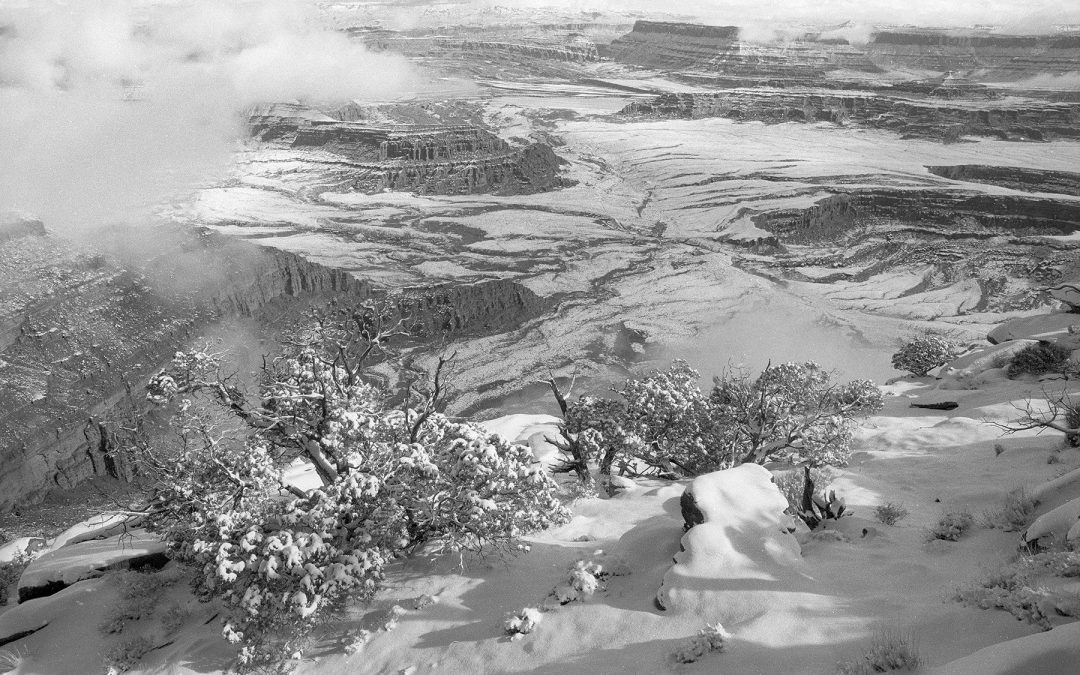 As we set out on the path there are milestones of our own making. So when one of those milestones approaches, well… it’s kind of a thing. Such was realized this past Christmas break as my 500th roll of film through the F6 approached. I wanted it to be something special. Last winter’s trip to Canyonlands found me working a lot with a 645 camera. Having also brought the 35mm gear it didn’t see much use. Sometimes when you get on a roll with a setup you just keep going. But the seed was planted for this winter and timing was right.

Spring of ‘87 was my first visit to Canyonlands. Knocking off work one evening I left Colorado in blizzard conditions to drive 6 hours west in the dark. Having been told by others familiar with the area to take the Cisco turn-off of I-70 rather than the main road through Crescent Junction, I found myself traveling dark, winding road along the Colorado River in snow easing to rain, eventually rolling out my sleeping bag on the banks of the mighty River late that night.

The next morning was something I’ll never forget. Fresh snow carpeted Canyonlands white and pure against its fractured red-rockedness, and the sites, sounds, smells and sense of wonder accompanying that inaugural journey permanently found its way into long-term memory.

The years since, I’ve seen Canyonlands and the Moab area go through many different iterations. Some would say it has thrived – others not so generous in their assessment. But – the memories from that first trip keep me coming back.

In light of all that, with my 500th roll approaching, the decision was made to shoot it in the wintery wonder of Arches National Park. For anyone unfamiliar with Arches National Park, allow me to suggest this book: Desert Solitaire, by the late Edward Abbey. It’s well worth the read. To be there with my son made it even more special.

In the interest of symmetry, or purity, or whatever – the 500th roll had to be black and white so I could reliably process it myself – and not have to send color to the lab. Somehow processing film one’s self, in water and chemicals, with hands getting wet, watching the thermometer, punching the timer, inhaling the smells and all – well, it’s just a more complete experience. And if it’s going to be black and white, in Arches, it had to be Ilford PanF. Everyone has their preferences – that’s mine.

A Note About Weather

This year’s trip saw a wide range of weather, which is always an event here in the Rocky Mountain West. After a rather dry and uneventful winter before Christmas, things of course changed once the decision was made to travel. Heading west through the mountains on clear roads, we were able to get tucked in safely at the Archway Inn (favorite place to stay, BTW… look them up) before the snow event. The next morning awoke to significant snow fall. Undaunted, we headed into Arches for a wonderful though potentially perilous drive. Arches is a heavily visited National Park, attracting every manner of visitor. The minivans with poor tires and little experience driving in snow proved no match for this winter storm, creating bottle necks at the bottom of the large hill leading into Cache Valley. Thankfully the Park Service guys were out to help, towing one after another out of the snowy ditch.

We snaked our way around the mayhem continuing on to the Devil’s Garden area where we enjoyed a nice and rather solitary hike in the snow. After a while we headed back to town to warm up and noticed we were one of only several cars on the road. Heading down the winding, icy hill leading to the visitor’s center revealed a Ranger parked in the uphill lane, in front of a closed gate across the road. Arches was closed.

For the next 24+ hours the park remained closed, for good reason. Plows arrived, de-icer spread on roads and by the next day she was ready to receive guests again. In the meantime, we found other things to do, like visit Potash, Island in the Sky area and Dead Horse Point. When the weather cleared the next day it was – I believe – the most beautiful time I’ve ever spent in Canyonlands. Fresh, trackless snow pillowed everything. Air and skies were clear, sun was out and views were out of this world.

The point is this: inclement weather is the photographer’s friend, not foe. Being patient and waiting out storms, or better still – being willing to get out into the storms – yields some of the best photographs you’ll ever make. Don’t wait for nice weather. Get out into what ever weather you’re presented with and find its unique beauty.

After working with the F6 for more than 10 years I can still truthfully say it’s the finest camera I have ever owned. I now have many cameras – mostly 35mm Nikons – all beautiful and somehow special in their own right. But the F6 is the first camera I reach for when it’s time to photograph. Since returning from this trip the F6 is operating just fine without the MB-40, at least for a time. You can read more about that here.

One other note, on the discontinuance of the F6. I’ve held off talking about this for a few reasons – the most important one being initially it all seemed to be rumor. Another reason is that, well… I suppose it was inevitable – and therefor not the unexpected shock it appeared to be for so many. For the F6 to have enjoyed such a long production run is really something. But nothing lasts forever; things change.

Years ago while going through my own personal evaluation whether to buy an F6, I knew the day would come it would no longer be available for purchase new. After having purchased every one of my other Nikons pre-owned… well, there was simply no question the F6 had to be purchased new and that was that. Working through that decision early and enjoying the best camera ever made since – I have no regrets.

So yes, it’s sad that Nikon has stopped producing the F6 and it is indeed the end of an era. But I reconcile that sorrow with thankfulness – and joy realizing that every one of my Nikons will long out live me, making them tools I’ll enjoy the rest of my life. Manufacturing cameras is a business and Nikon is making the best decisions they know how in what must be an unbelievably difficult market. Something I know nothing about. I’m an artist – thankful for the attention to quality and detail Nikon has poured into each tool they’ve produced that I own. The future is the future, bring it on. I’ll photograph it with my F6.

Moving back into the dark room to print these negatives, again in the interest of symmetry, or purity, or whatever – prints will be wet-printed on fiber-based Ilford paper – not ink jet prints. Anyone interested in purchasing prints will be directly supporting shooting film and keep in the F6 Project on-line.

Full disclosure (not that it really matters)… three rolls of film were exposed in the 3 days we visited. Numbers 499, 500 and 501. Photos from all three roll appear in this article named 500.