by John Crane | Oct 31, 2014 | Destinations, From the Past, Inspiration, Places, Vintage Nikon 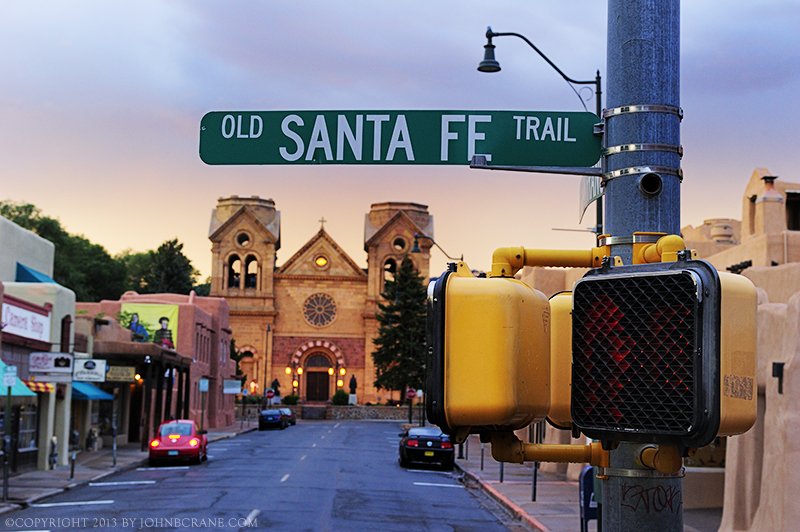 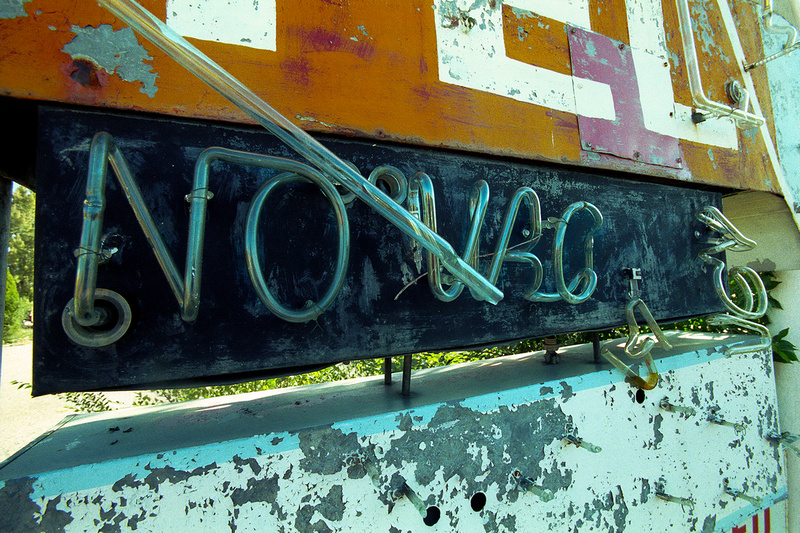 In each blog post I attempt to roll in an application to the F6. The F6 is, after all, the reason for this site – and why so many people come here: to read about it. For this series of posts in the spirit of “try something new… you might like it,” I’m going to try something a little different: I’m going to add the Nikon F4s into the mix.

SANTA FE – If heading to the art epicenter of the country with two, vintage Nikon film camers isn’t on every photographer’s bucket list – you need to re-write your bucket list. I’m fortunate to live within an easy day’s drive – and have the benefit of history and knowledge of such a place. This provides new depth and opportunity with each visit. On our latest sojourn to “The City Different” of course I shot the F6, but this was the first outing with my newly acquired F4s – a birthday gift from my lovely bride. When we lived in Santa Fe in the late 90’s the F4s was my primary camera. I sold it shortly after buying my D3s in 2010 but knew I’d reacquire one some day. This new F4s shipped straight from Japan (no US preceding the serial number) and is in absolutely gorgeous condition – like it had never been used. So to return to my old stomping ground with two vintage, Nikon film bodies was a wonderful opportunity to make some unique images on film (I realize I’m stretching a bit, describing the F6 as a “vintage camera” when in reality it’s only 10 years old). 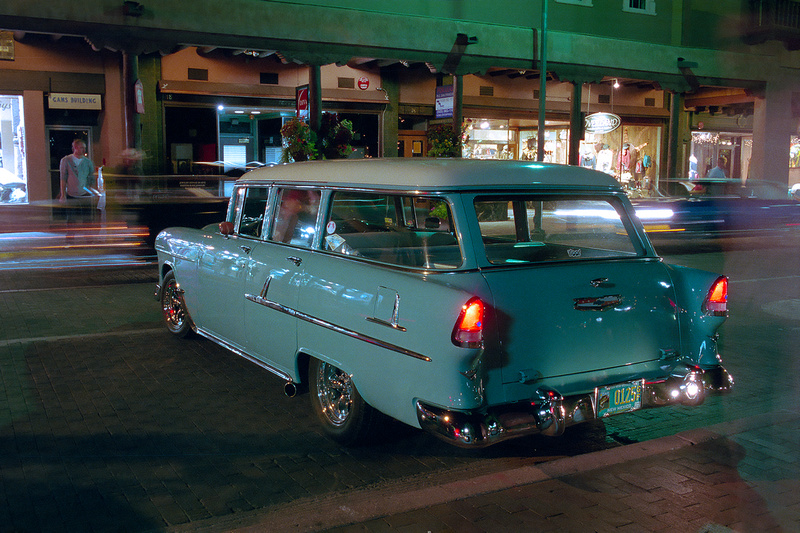 I’ll get this out of the way right now: comparing the Nikon F6 to the Nikon F4s would be a little like (and I say this will all due respect to both era’s engineering/design) comparing – say – a 1956 Chevy Nomad Wagon with a 2014 Chevy Tahoe. There really is no comparison between the two flagship cameras from two different eras of engineering and design. Both are spectacular for their time. Let’s leave it at that. But… I suppose if you want to think of this next series of posts as a real-world usability exercise; what it’s like to actually shoot the two cameras side by side – you’ll get an idea if whether adding the F4s to your bag is a good move. I’m sure tickled to have one again and absolutely love working with it. Its role isn’t to replace the F6, but instead provide an additional, excellent way of recording images on film – using the same system (*see below). 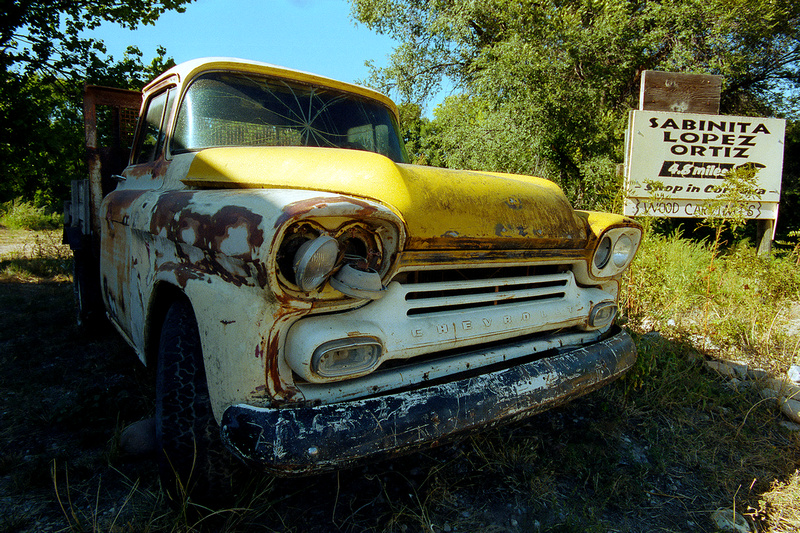 The overall approach was to shoot the F4s for general purpose, hand-held work with higher speed films (ISO400 and up) because I didn’t envision shooting it with a tripod for a few reasons: one is the camera doesn’t have an L-bracket as the F6 does. My primary tripod uses a Kirk ball head, which requires a Kirk-mount for each camera. The F4s is old enough that I don’t expect to easily find an L-bracket. Besides, the ergonomics of the camera are so elegant; smooth, sculpted and contoured in all the right places (an absolute joy to hold) – that to slap an awkward piece of aluminum onto such a beautiful form for the occasional appointment with the tripod was just something I couldn’t muster the gumption to do. I do have a generic Kirk mounting plate that screws into the tripod socket if need be. *Also – regrettably – the F4 system doesn’t use the same MC-30, 10-pin cable release as the F6, so it means either adding a MC-12/12A to the bag – or – just using an old-fashioned, screw-in style cable release in the threaded port near the bottom, left rear of the camera. So if I had to use the F4s on a tripod I could – but elected to keep it hand held for this trip. The F6 was also for general shooting, and anything requiring a tripod – for the above reasons – only in reverse. Phew… did you get all that?

Film for the trip was varied – relying mostly on a C-41 solution. Following up on a recent post about pushing Ektar 2 Stops, I added ample Ektar, intending to push to ISO200 (instead of its native ISO100) for the additional speed as well as saturation and contrast bump (see chapter 2 post to follow). Following up on another post – about over exposing Portra, as per usual I had an adequate stash of both Portra 160 and Portra 400 – two emulsions that have become my “go-to’s.” Having two bodies –  I also threw in enough Delta 400 and a few rolls of Rollei ATP to satisfy the black n’ white craving (one destination was Georgia O’Keefe’s old stomping grounds, Ghost Ranch and the Abiquiu area). I had my D3s in the bag too, just in case I ran out of film – so was pretty much ready for anything. 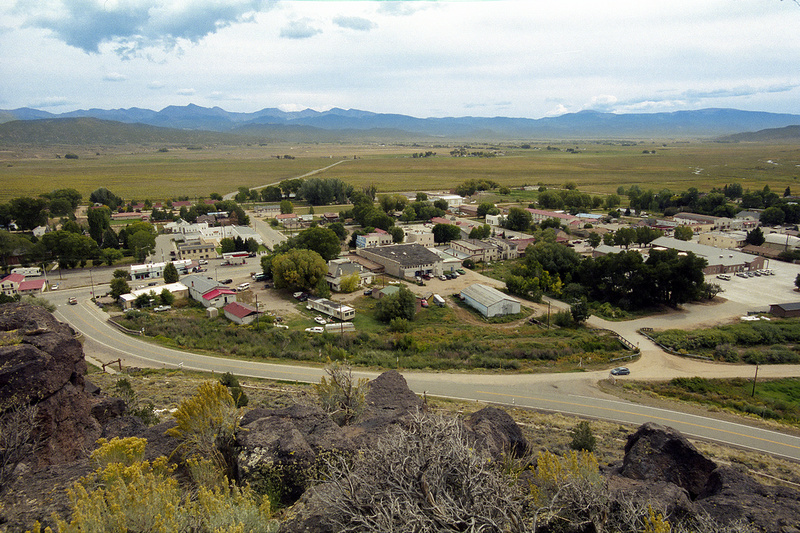 Our first stop was the small town of San Luis, located virtually on the Colorado-New Mexico border in the picturesque but lonely San Luis valley. San Luis is the oldest town in Colorado and with a population of 629 people (2010 Census) it’s also the most populated town of Costilla County. We travel through San Luis because it gets us off I-25 at Walsenburg (Colorado) and after summiting LaVeta Pass and entering the San Luis Valley – begins the most scenic and beautiful part of the drive South.

The Sangre de Cristo Catholic Church sits atop a butte above town and is one of the main attractions of the area. The church was established in 1992 and about then I remember returning from my first trip to Taos – and climbing amongst the sanctuary’s construction. At the time I thought it was an ancient church in ruin. Turns out it was a new church being built. Who knew? I wish now I had images from that trip 22 years ago. In 22 years I wonder what I’ll wish I had images of from now? 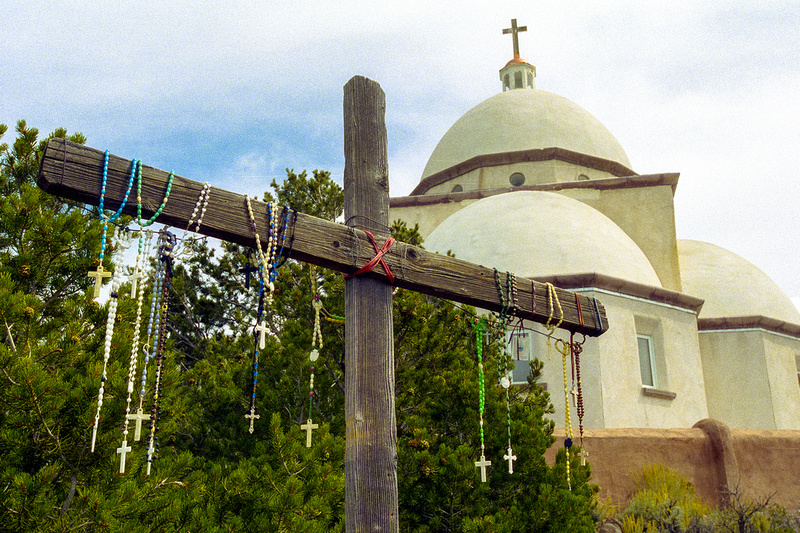 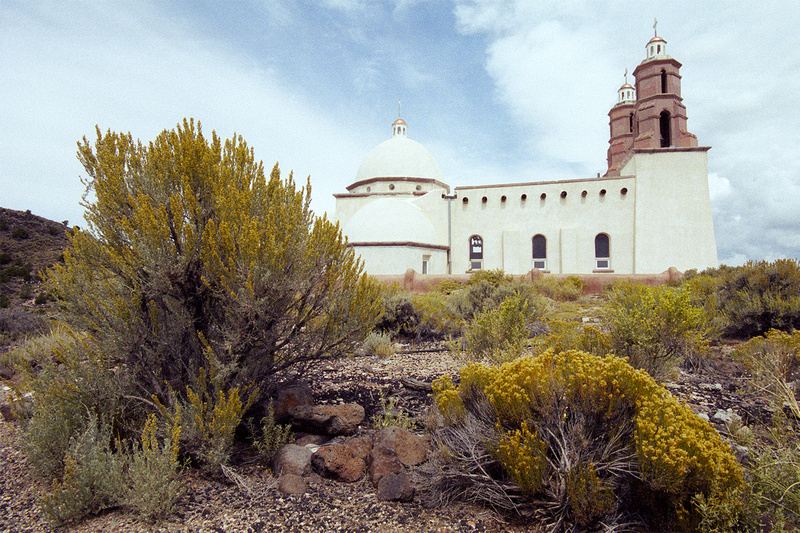 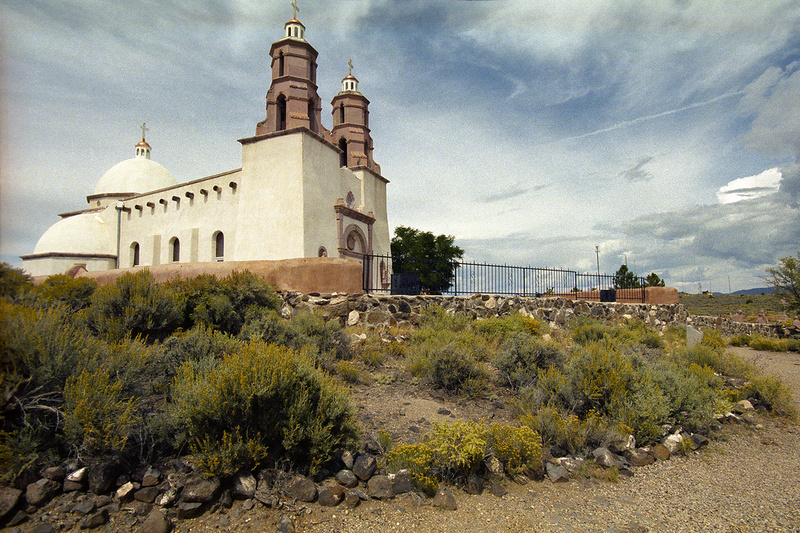 During my earlier stint shooting the F4s I primarily shot the 35-70/2,8 (non-D) push-pull zoom. It’s a fine lens and I still have and shoot with it. Today, however, I also have the opportunity to mount a wider variety of lenses on the body and enjoy previously unexperienced creativity with the camera. But as anyone with multiple lenses and bodies can attest, if you try to carry around too much gear things get heavy and cumbersome. Disciplining one’s self to one body and one lens for an outing is a great exercise. For San Luis the F4s was paired with the Nikkor 17-35/2,8D and performed beautifully. Especially with the 17-35 mounted – and no strap – the F4s isn’t a light camera. But the smooth, rubberized grip covering contours placed in just the right spots made it quite comfortable in hand while walking around for an hour plus. 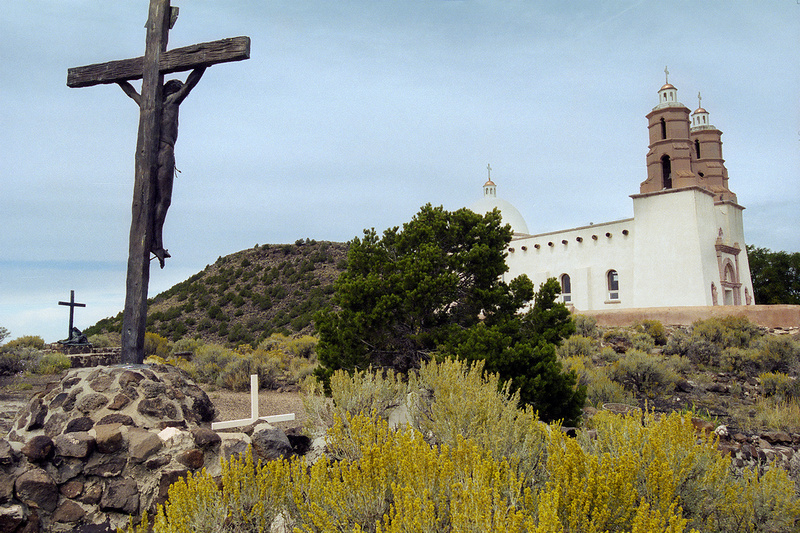 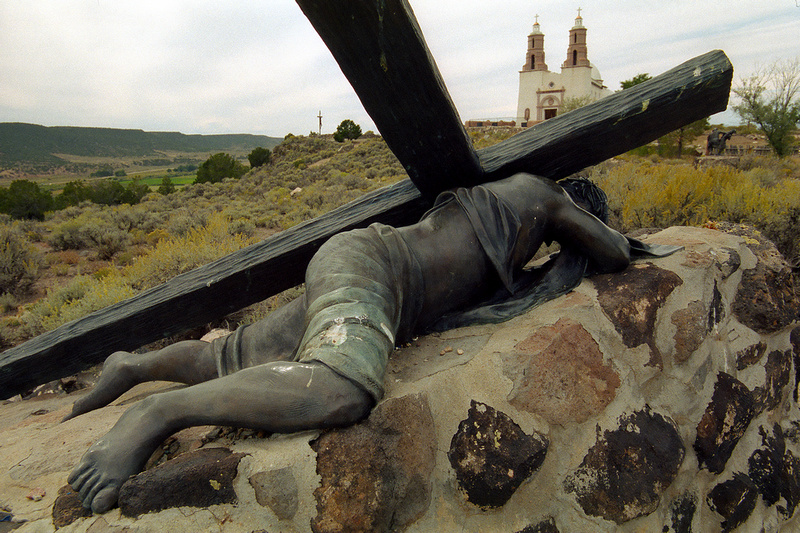 Exposure note: most of these images of the church are effectively 2 stops over exposed by the F4’s (Matrix) meter. The roll of Portra 400 was (intentionally) over exposed by one stop at ISO200, and I added another stop of exposure compensation using the F4’s exposure compensation dial while exposing the frames containing sky. I was a little worried they’d blow – but not even close when looking at the negative; it’s healthy and strong all around. I was especially pleased with the level of detail in the sculpture shots. The cast bronze was dark to begin with and it would have been easy to bury the nuance in shadow. Portra did a beautiful job of holding tone in the sky while recording detail in the dark bronze. A chrome film would have effectively produced a silhouette of the sculpture. Portra continues to impress me – especially when provided ample light to work with. Alas, you can’t control the light – and don’t always have the availability to wait around for things to get good. We had an active sky with high clouds knocking down bright, high-altitude sun enough to diffuse harsh shadows. But –  it was mid-day, so we made the best of what was given and moved on. When light isn’t ideal I tend to focus more on composition, subject matter – objects – and story telling – rather than broad-sweeping, scenic beauty. Oh how I’d love to be on this hillside at sun-up. I can only imagine the color in skies passing over the San Luis Valley during these times. For now at least, this will have to do.

Note: I’ve heard others discuss dislike of short, “just passing through” trips while out shooting. I couldn’t disagree more. Photography – especially film photography – is about the long game. Treating these short trips as scouting opportunities – sometimes making copious notes on subjects, ideas, and times of day and position of the sun relative to the season – pays dividends in the long run. In the future, when you have opportunity to revisit the same destination for longer, you now have a starting point. 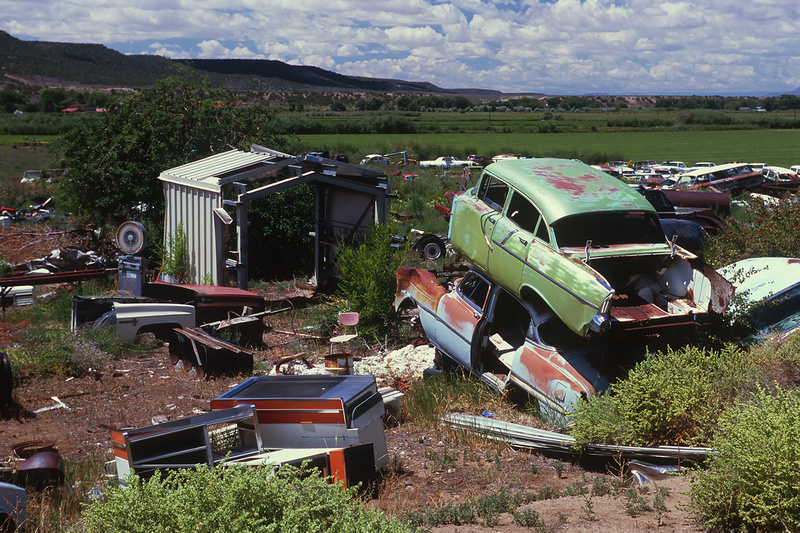 San Luis, Colorado (2013). This image was made on a previous trip through San Luis last August. We spotted this junk yard, which you can almost see at the base of the hill in the first overview shot of San Luis. Multiple visits to the same destination builds knowledge – and relationships with the locals.

Besides, for me photography is about exploration. When I have a camera in hand I move slower, look more intently, interact more directly with people and places, and overall the experience is richer and deeper because of that. Even if it’s for just an hour – make the best of that time. Take notes. Keep a log book in the car and note time of year and day. Pay attention to vegetation. You’ll learn something about the land, and be better informed the next time you pass through.

Next stop will be Taos, but we’ll save that for the next post. Thanks for reading this far and check back in a week or so

Peace to you, John B. Crane