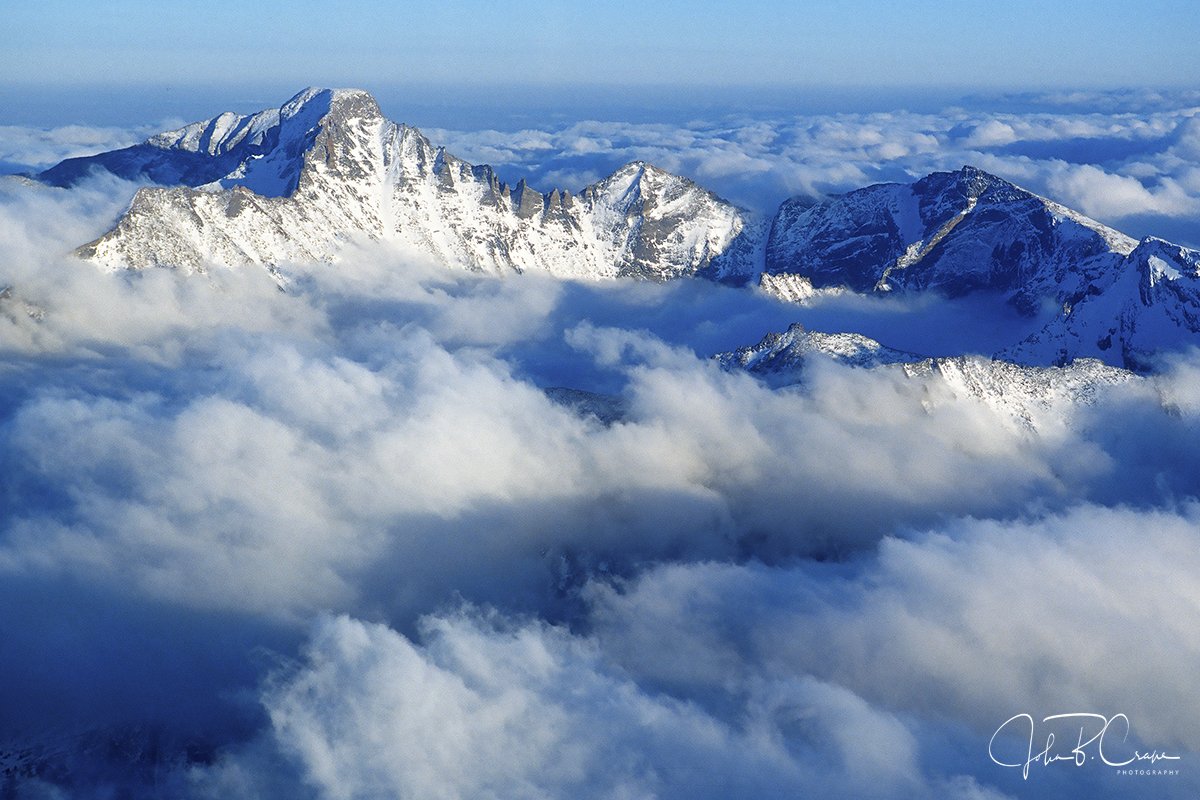 Above: From left to right: Mount Meeker, Longs Peak, Keyboard of the Winds, Pagoda Mountain and Chief’s Head Peak. At center-right you can see the very tip top of the Spear Head, a triangular slab of granite jutting up through the clouds from the valley floor beneath. Glacier Gorge, Rocky Mountain National Park, Colorado (2017). [Nikon F6, E100VS, Nikkor 28-70ED f2.8 @ 70mm; 1/250 @ f7.1] 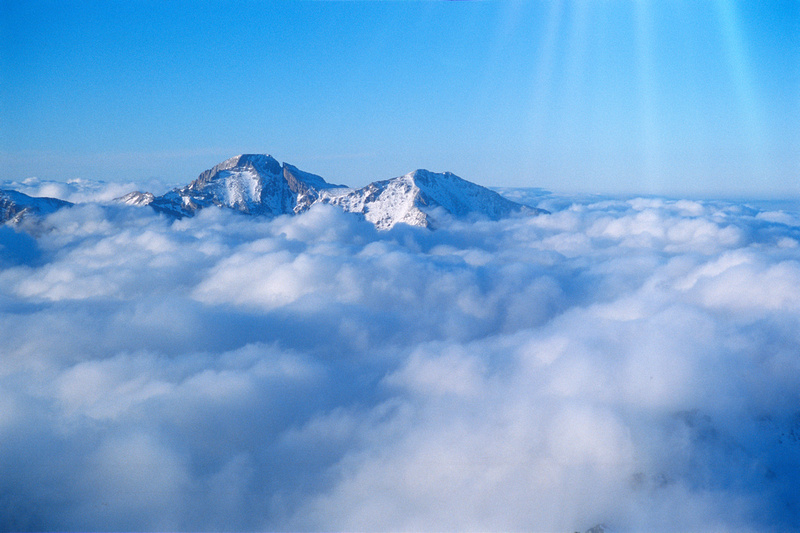 Flying commercially isn’t my typical MO, preferring instead to drive through places rather than fly over them at 30,000′ and 600 mph. So when a skilled pilot offers to take you flying low and slow over the heart of Colorado’s Rocky Mountain’s High Country simply for the sake of the experience – just say yes – please, and thank you. A few weeks ago I had the privilege with my son and a few good friends to see this country I love so much from a completely different point of view, and make a few photographs for those of you who may never get to see it. 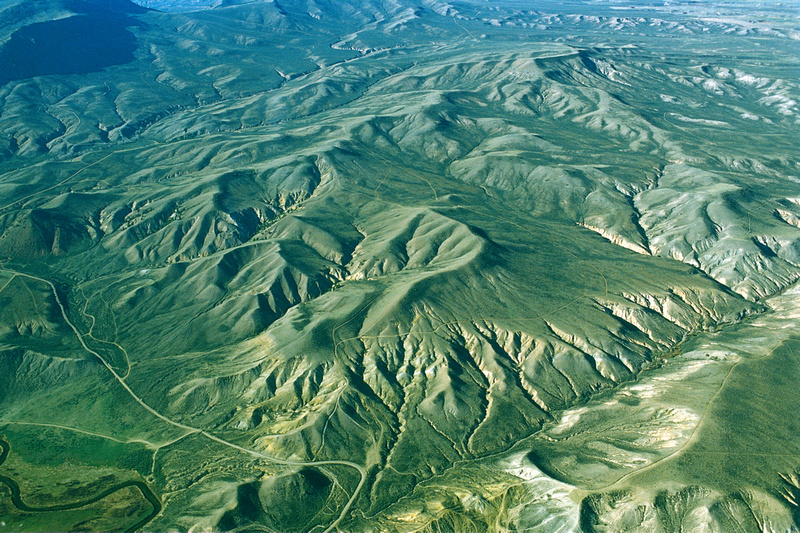 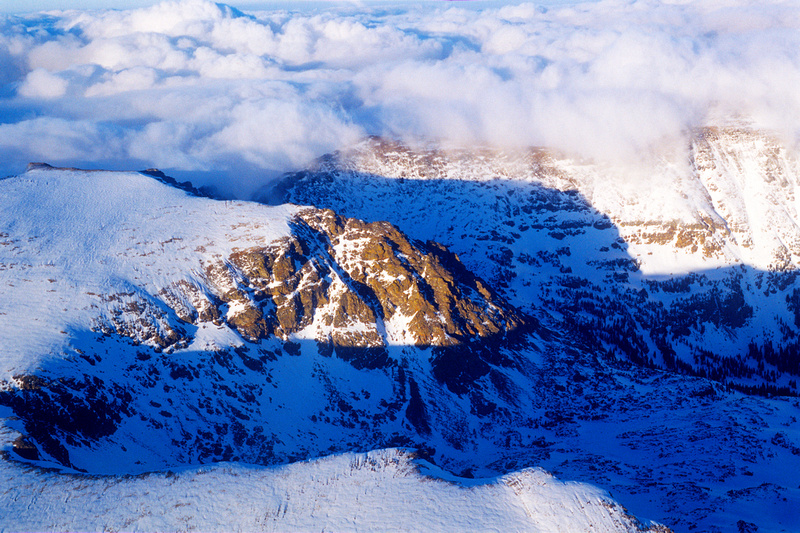 We’d been planning the flight for several weeks but as is sometimes the case at the last minute weather decided not to cooperate. When morning came for the scheduled flight, rain from the day before left the cloud ceiling too low and visibility wasn’t happening. Texts flew to and fro debating logistics and eventually one party fell on their sword, letting go of their seats because of an afternoon commitment. This opened the door for an afternoon flight if weather cleared. 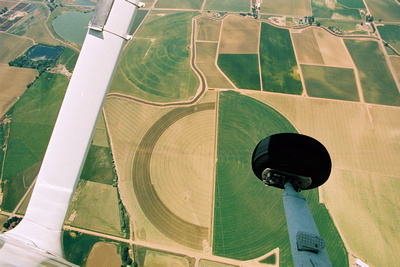 Over Weld County in a Cessna Skyhawk, 2011. Landing gear and wing struts are facts of life shooting from the air. As much as you want them on the plane for obvious reasons – they can be tough to shoot around.

Because the opportunity to fly low over Colorado’s High Country doesn’t happen often I wanted to make the most of it. Considering how to approach it photographically briefly included going digital. A few years ago I was in another Cessna and appreciated the flexibility shooting digitally provided. Instead, I spent some time going through my previous shots looking at ISO, shutter speeds, lens choice and aperture and decided The F6 + some recently acquired Ektachrome 100VS was the winning combination.  As a back up I had the F5 + Portra 400 in case light became an issue.

Camera nerd:  focal length, shutter speeds and aperture info is provided for anyone interested in such things; some day you may have opportunity for such a flight and this could provide a head start setting up. Shutter speeds were typically between 1/400 and 1/250 at f7.1. The plane was traveling about 200 miles an hour but the ground was so far away the overall impression through the camera’s lens was that it passed slowly below. Most of the time the lens was zoomed to about 70mm. I also had the 70-200 with me but it was unnecessary – and too large and unwieldy in the small cockpit. 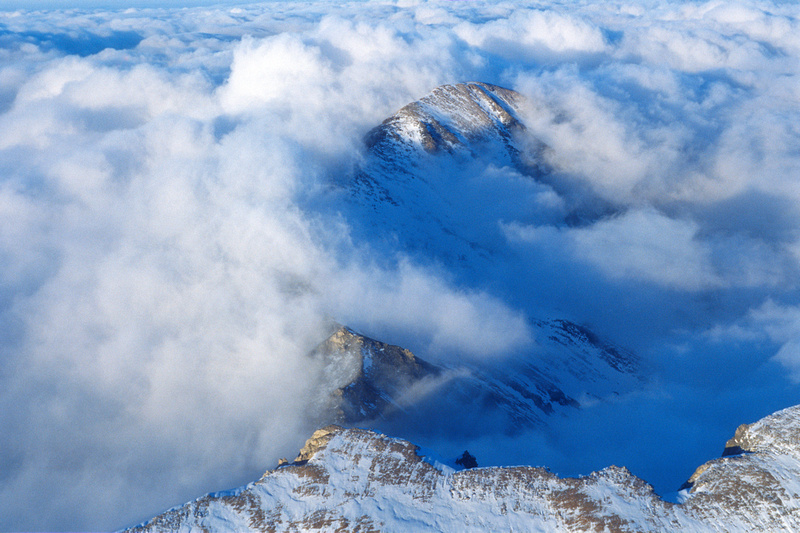 A favorite from the day: 13,520′ Ypsilon Mountain, Rocky Mountain National Park. Light is everything. The direction and angle of the plane determines the shots. With no way to roll the window down, shooting through it is the only option, introducing the challenge of reflections and glare entering from the opposite side of the aircraft. Having a skilled pilot maneuver to the desired point of view is crucial to frame things up properly. [Nikon F6, E100VS, Nikkor 28-70ED f2.8 @ 45mm; 1/250 @ f7.1].

I wasn’t sure what plane we’d be flying and held my breath as we walked across the runway. Beggars can’t be choosers. To my delight it was a Cessna Centurion II, a high wing aircraft with retractable landing gear and no wing struts; the perfect plane for aerial photography. Wing struts and extended landing gear have a habit of creeping into the frame when you’re pointing the camera towards the ground.

We enjoyed a brief introduction to the plane and flying in small aircraft then climbed aboard, donning headsets and fastening seatbelts. 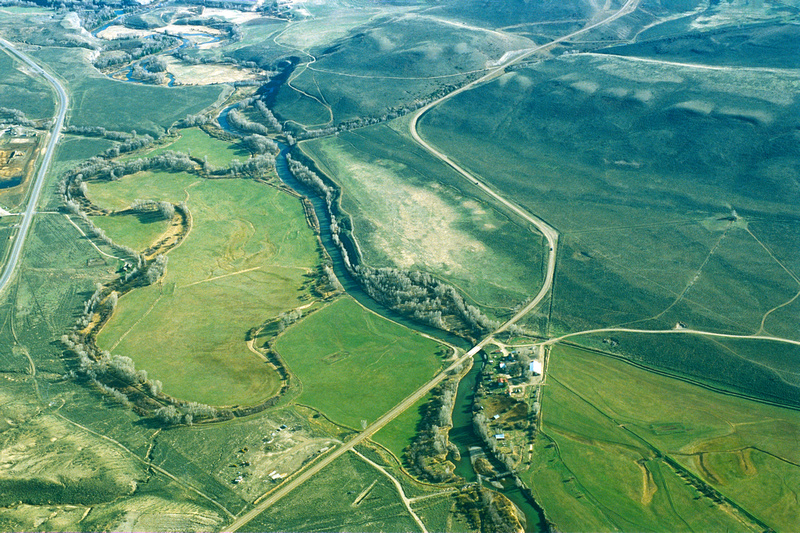 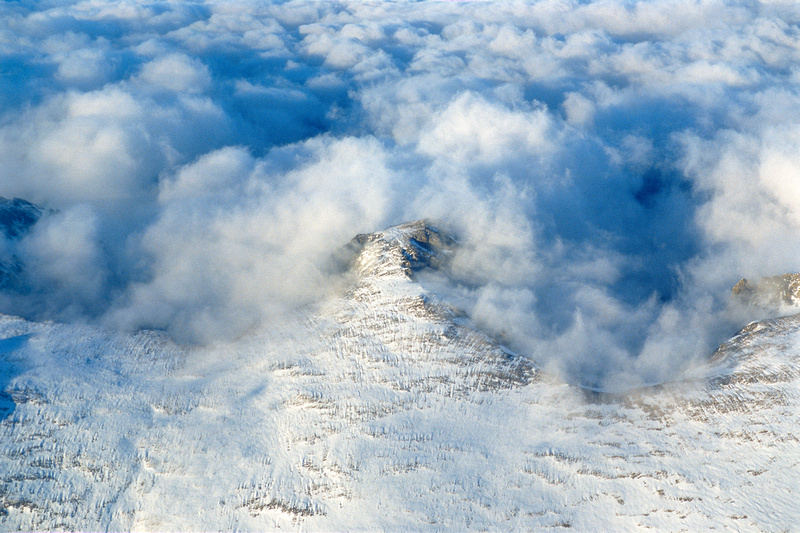 A sea of dense, puffy clouds blanketed the Rockies this beautiful afernoon, with the occasional granite beheamoth poking its craggy head up through for a breath of crisp, high-altitude, Colorado air. The Mountains seemed to wave hello to our little craft as we passed above, reminding me of humpback whales breaching in Alaska. [Nikon F6, E100VS, Nikkor 28-70ED f2.8 @ 70mm; 1/250 @ f7.1]

Beginning in Loveland, Colorado the first leg of the flight was into the afternoon sun. Clouds along the Front Range had dissipated and skies cleared allowing navigation by site and gorgeous views below. Given the angle of the sun, even with the large hood of the Nikkor 28-70 flare was a problem. We zig-zagged and spiraled our way up and over the unbelievable terrain of Rocky Mountain National Park accompanied only by sound the single turboprop spinning at 2,500 RPM’s (the miracle of flight, right?). Every once in a while a robotic, female voice broke the silence with, “warning, terrain… warning, terrain.” At one point – as casually as I could fake – I asked our pilot if that was anything we needed to be worried about. He assured me it was not. In less than an hour we were in Kremmling. It would have taken me three hours by car. 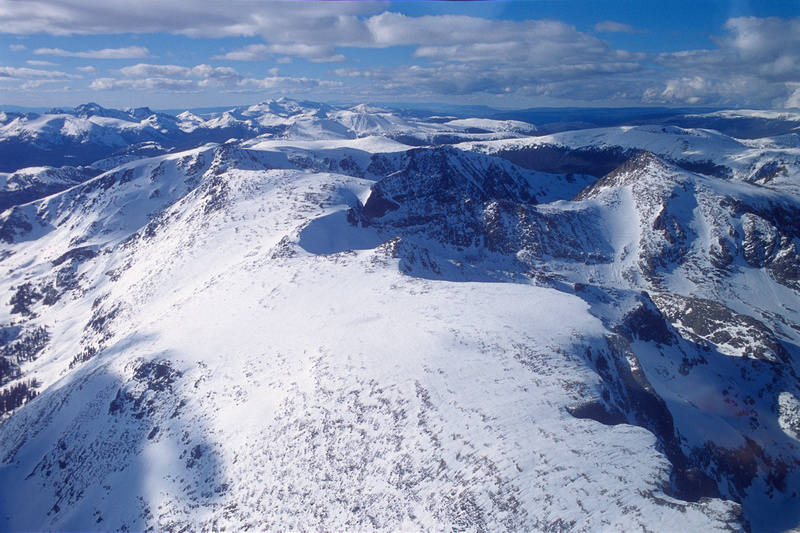 Earlier in the afternoon flying into the sun (west) the light was a little more harsh; shadows more pronounced, and fighting glare and reflections off the windows was a challenge. Despite this – it’s just tough to make a bad photograph when this is what’s before you. [Nikon F6, E100VS, Nikkor 28-70ED f2.8 @ 34mm; 1/800 @ f5.6] 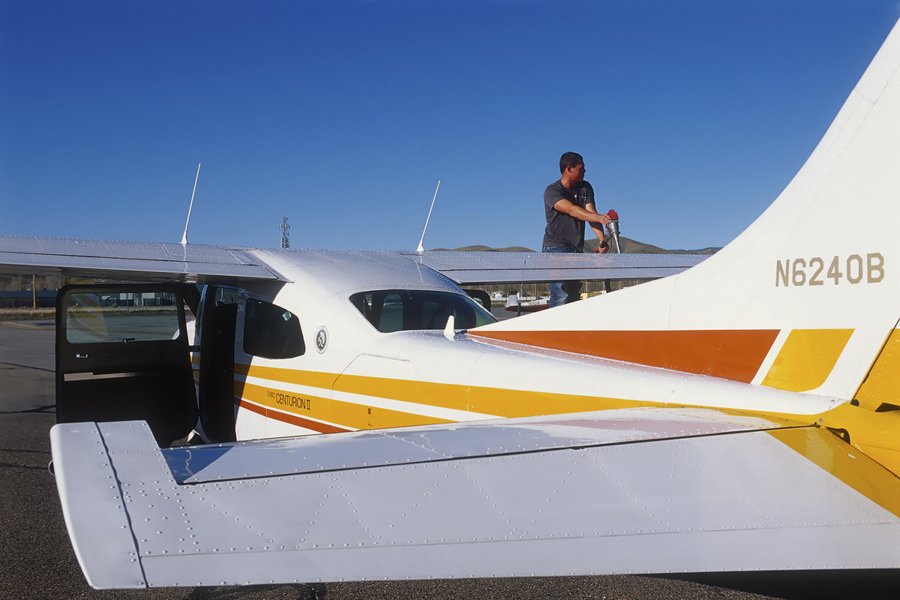 We refueled in Kremmling and decided to make our way back the way we came. After take off I put the camera down and flew the plane for a bit, my first time flying. But when we approached the big mountains I handed the wheel back to the pilot and it was time to get to work. The light was perfect, skies were clear and the views were, well… 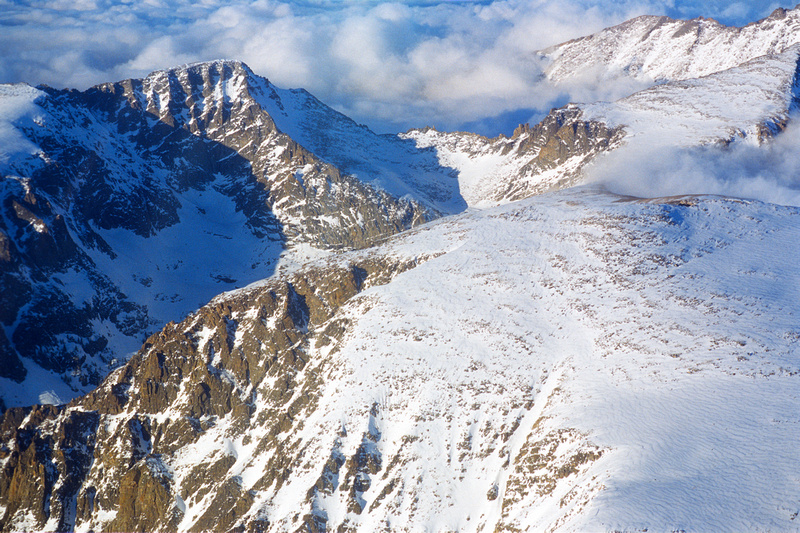 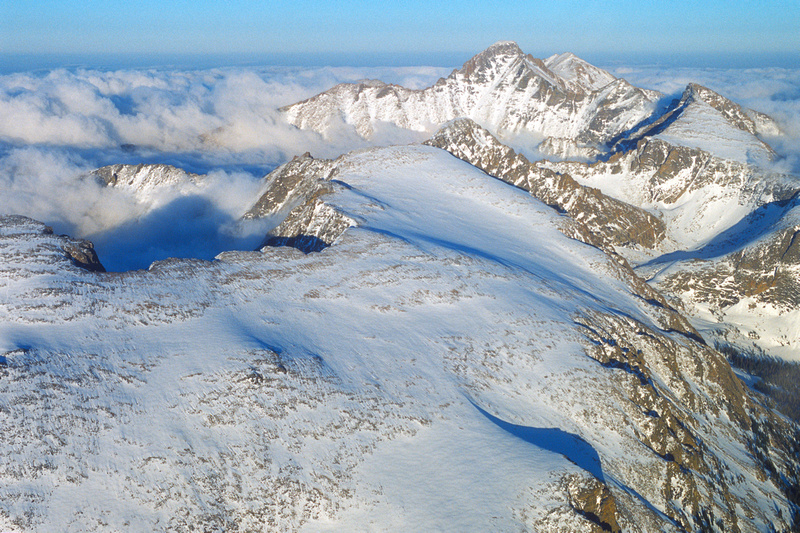 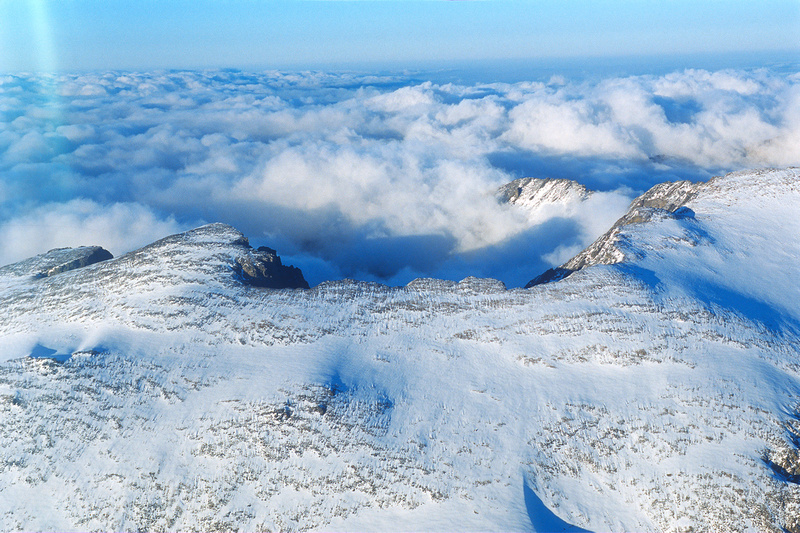 F6 Nerd Stuff: As each roll finished we were flying over something else I just didn’t want to miss. Fortunately the F6 rewinds and reloads fast (Custom Setting D:2 set to ‘Auto’ automatically rewinds the roll at the end of the the last frame. Custom Setting D:3 tells the camera to leave the leader out rather than sucking it all the way back into the canister, and Custom Setting D:4 tells the camera when to rewind the film – at frame 35, 36 or whenever the end of the roll is detected). Auto rewind pulled the film back into its canister in mere seconds, the new roll was put in place and the leader pulled out to the red line. The back snapped shut and just like that I was shooting again. 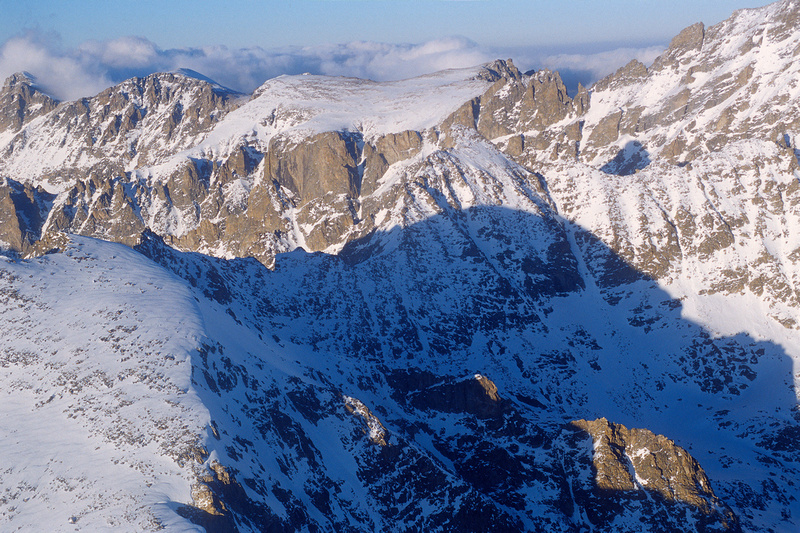 For this flight, focus mode was set to Group Dynamic auto focus (the little diamond icon on the focus selector switch). I also re-coupled auto focus with the shutter release button (Custom Setting A4: AF Activation Release/AF-On). Plane cockpits are small and making my thumb do the autofocusing on the AF-On button required swinging my arm up a little higher as I turned my body at an already awkward position in the seat, trying to avoid the wings and adjust to whatever reflections and glare were coming in through the window. It’s amazing how one little tweak can simplify shooting – something the designers of the F6 well understood and planned for. There was no need for selective focus as the camera quickly and accurately acquired whatever ground it was pointed at. 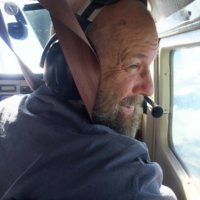 Having the time of my life. iPhone photo by Matthew Crane. 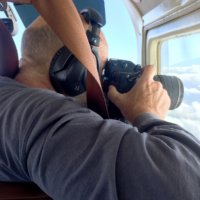 Having the time of my life. iPhone photo by Matthew Crane.

Keeping horizons level can be a challenge in flight. Between composing quickly, a shifting horizon line out the window and dodging reflections in the window, often times you get as close as you can and rely on straightening in post production. If you’re close in the original shot you’re not throwing a lot of image away when you straighten the frame. 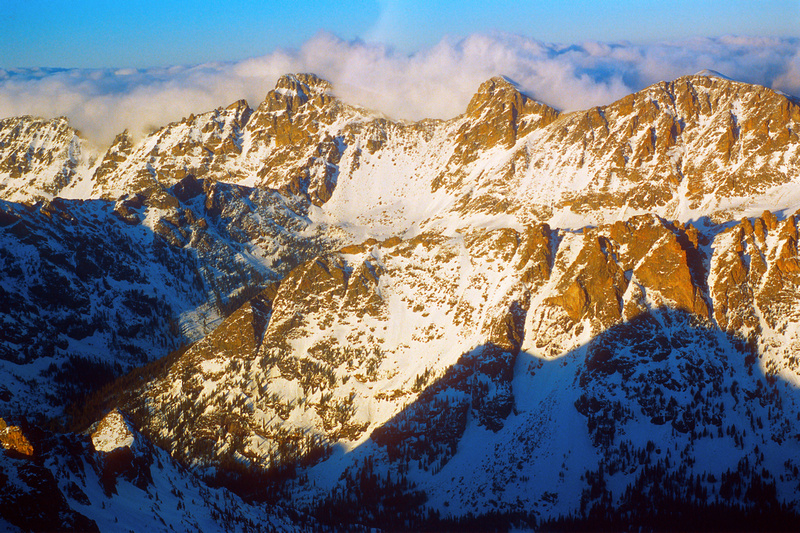 Often I found myself simply gazing out the window in silence, trying to imagine standing at that line where the shadow begins. I’ve been there many times; experiencing the mountains as warm, inviting, beautiful friends basking in the glow of afternoon sun. When the sun sinks and that shadow line rises they become cold, foreboding places leaving one feeling vulnerable and alone. These Rocky Mountains are a treasure and deserve our utmost respect. 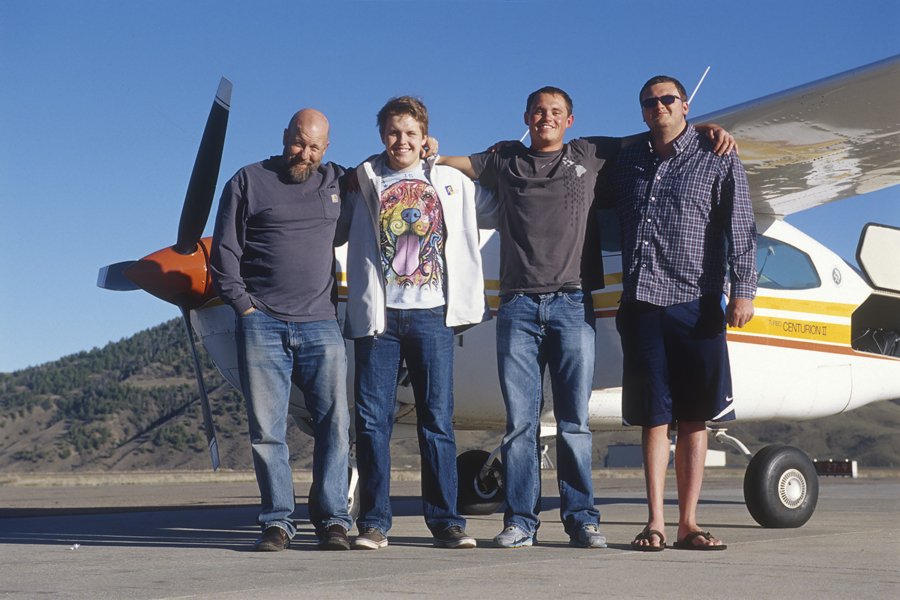 At the end of the flight we glided gently back to the Loveland-Fort Collins airport as our pilot stuck a perfect landing. He smiled as he said, “you guys don’t know how lucky we were on this flight… it’s never like this.” Afternoon flights are prone to a lot of upheaval from warming air, sending the plane into various lurches and making for a bumpy ride. Our flight was smooth as glass making shooting that much easier and more enjoyable.

A big thanks to my good friend Kole, an awesome pilot and generous guy allowing the use of his Cessna Centurion II for the flight.