Battery Options for the Nikon F6

One of the prime directives in development of the F6 was to maintain the performance level on par with the F5 – but reduce power consumption. Mission definitely accomplished. 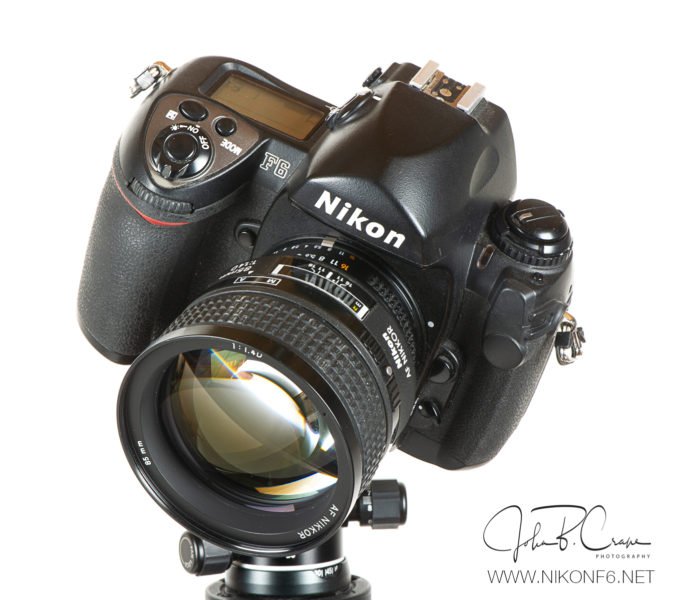 One of the consistently erroneous pieces of information I find on the internet centers around the type of batteries the F6 uses. One web site claimed the F6 requires a special, proprietary battery. I thought I’d set the record straight here. One of the many truly great things about the F6 is the number of battery options available.

In the standard configuration it’s true: two 3-volt lithium CR123’s are recommended. While not proprietary, they aren’t quite as commonly found as double-A’s. But they’re inexpensive and still plentiful, hold plenty of power for your average shooter and are a great solution if you prefer the camera in its “smaller” configuration.

They fit neatly into the MS-41 battery caddy and insert into hollowed-out main grip of the body. The chart in the user manual says at normal operating temperatures expect the F6 to be good for 15-35 rolls of film depending on things like VR, Auto Focus, Continuous High or Single shot shooting, etc. Your mileage may vary. If you’re going to go this route I’d always have a spare set of CR123’s in the kit.

The F6 also has a backup battery that retains the camera’s settings and clock. It’s not possible to replace or service this internal battery without sending the camera to Nikon. If depleted, it should fully recharge within 48 hours when new batteries are inserted. But I’ve heard of people experiencing otherwise… not sure what to tell you other than it may be time for servicing. 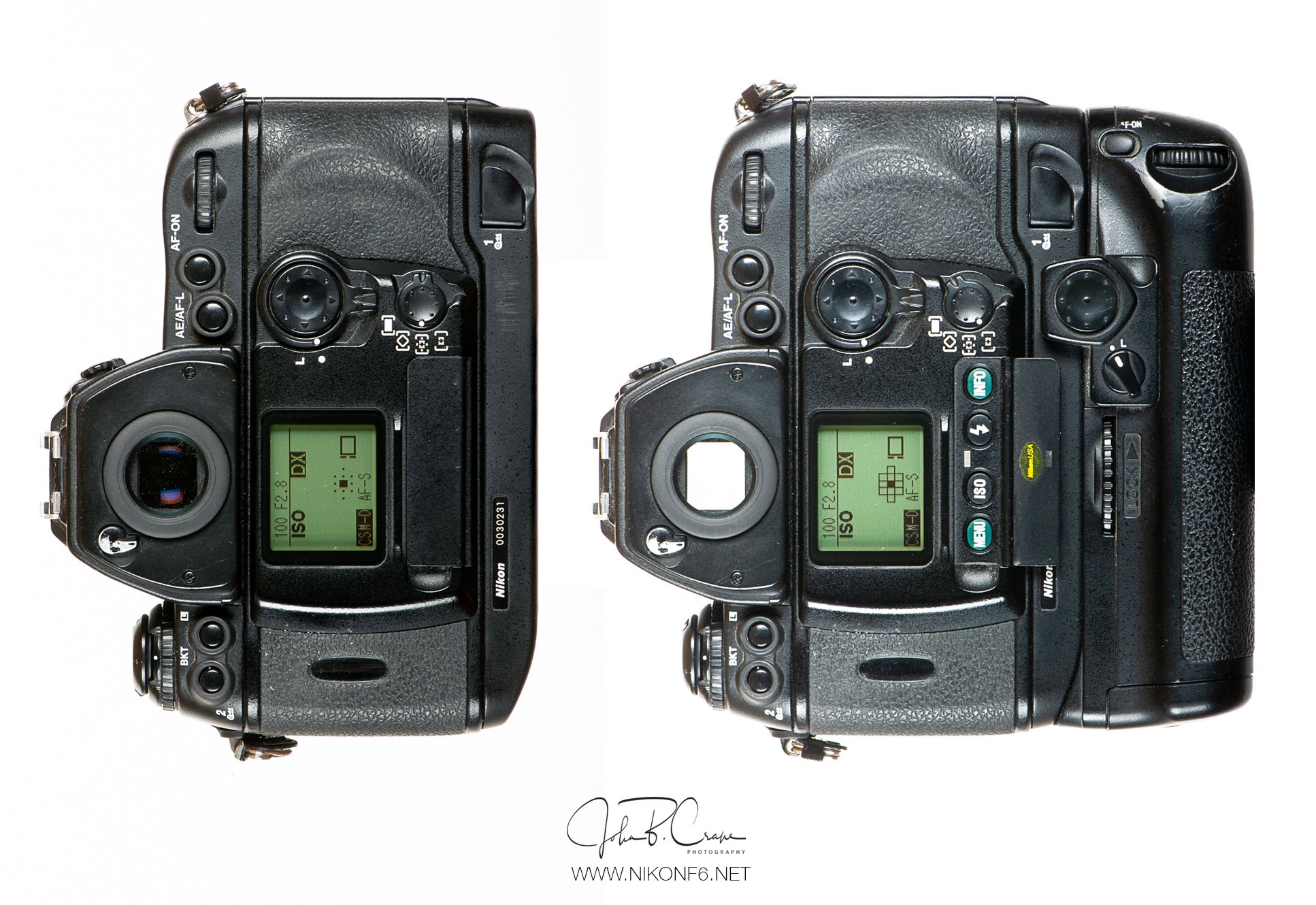 Nikon F6 with and without MB-40 Grip

Another of the great features of the F6 is the convertible option: with or without the optional MB-40 grip. I understand the appeal of the camera with no grip: it’s small, nimble, light and easy to stow. I also understand the appeal of the numerous additions the MB-40 offers to the F6: vertical release, higher power output, additional autofocus engage, additional focus point selector and depending on your preference, a overall better grip on the camera. The additional power options comes into play here: not only is the camera capable of faster Continuous High frames per second (seriously though, who shoots film like that anyway?) – it offers alternative battery options. 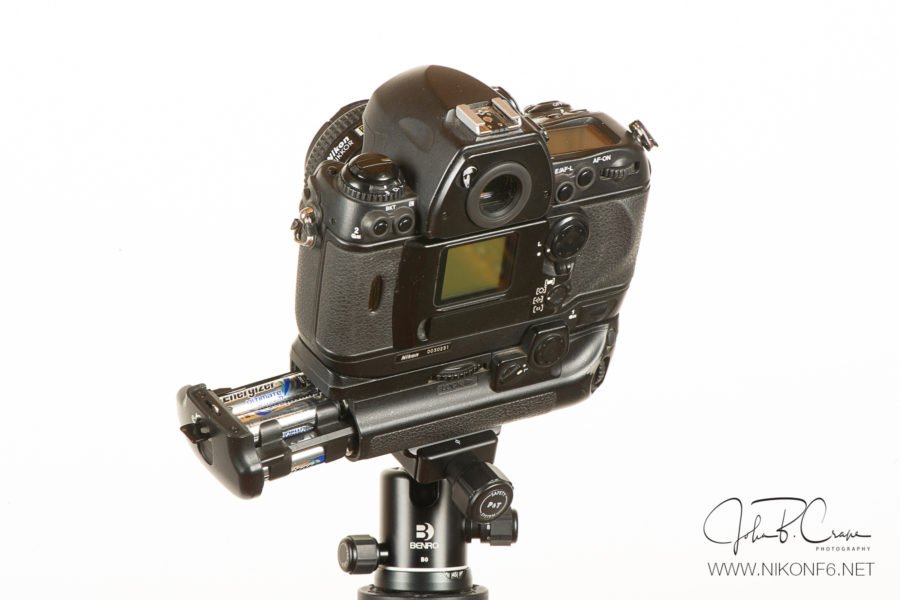 Double A batteries are available pretty much anywhere and therefore are a solid, reliable source for powering your camera no matter where you travel. Given the F6’s complete dependence on electronics this is an important operating consideration, especially if your out of range of retail stores likely to carry them. Unlike some older Nikons if the F6 runs out of juice you’re pretty much DOA. There’s no manual release; the shutter will not fire.

The F6 will run forever (well, not literally) on 8 AA (lithium) batteries using the included accessory MS-40. They slip nice and neat into the battery chamber and you’re good to go. Battery life will vary, but the F6 brochure reports as follows: AA-type alkaline-manganese, approximately 10-55 rolls (notice this is less than the standard configuration CR-123’s). AA-type Ni-MH, approximately 30-55 rolls. AA-type lithium, approximately 45(!) rolls. 45-93 rolls on 8 lithium batteries. Plus, Lithium batteries are considerably lighter than Alkaline batteries. They’re more expensive – but if you do the math, are more than worth it. 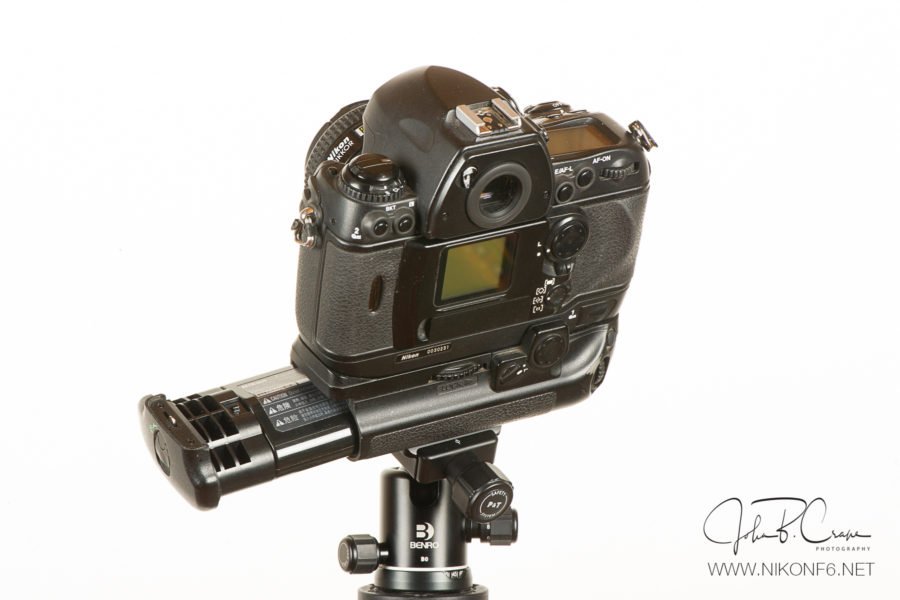 Powering the Nikon F6 with Nikon’s EN-EL4a battery is easy with the option MB-40 grip.

This is Nikon’s standard rechargeable battery for their big-body pro cameras. Putting out a whopping 11.1 volts, this solution will power your camera for 35-65 rolls, according to the catalog. Fewer than off-the-shelf Lithiums, but still 2X the CR123’s and 3X standard alkaline double A’s. The battery will run you about $114 but you’ll pay for it many times over its life by not having to buy the more expensive lithium batteries. The other great thing about the EN-EL4a is it fits in the D2 and D3 series big-body digital camera’s too. The EN-EL4a clips into the BL-3 adaptor and inserts into the MB-40’s bottom hollow cavity.

So you can see that running out of power shooting the F6 is not anywhere near as much a danger as shooting with a digital camera. One of the prime directives in development of the F6 was to maintain the performance level on par with the F5, but reduce power consumption, which they definitely accomplished.

So the next time you run across an article talking about the power requirements of the F6, fact check it against what’s reported here.