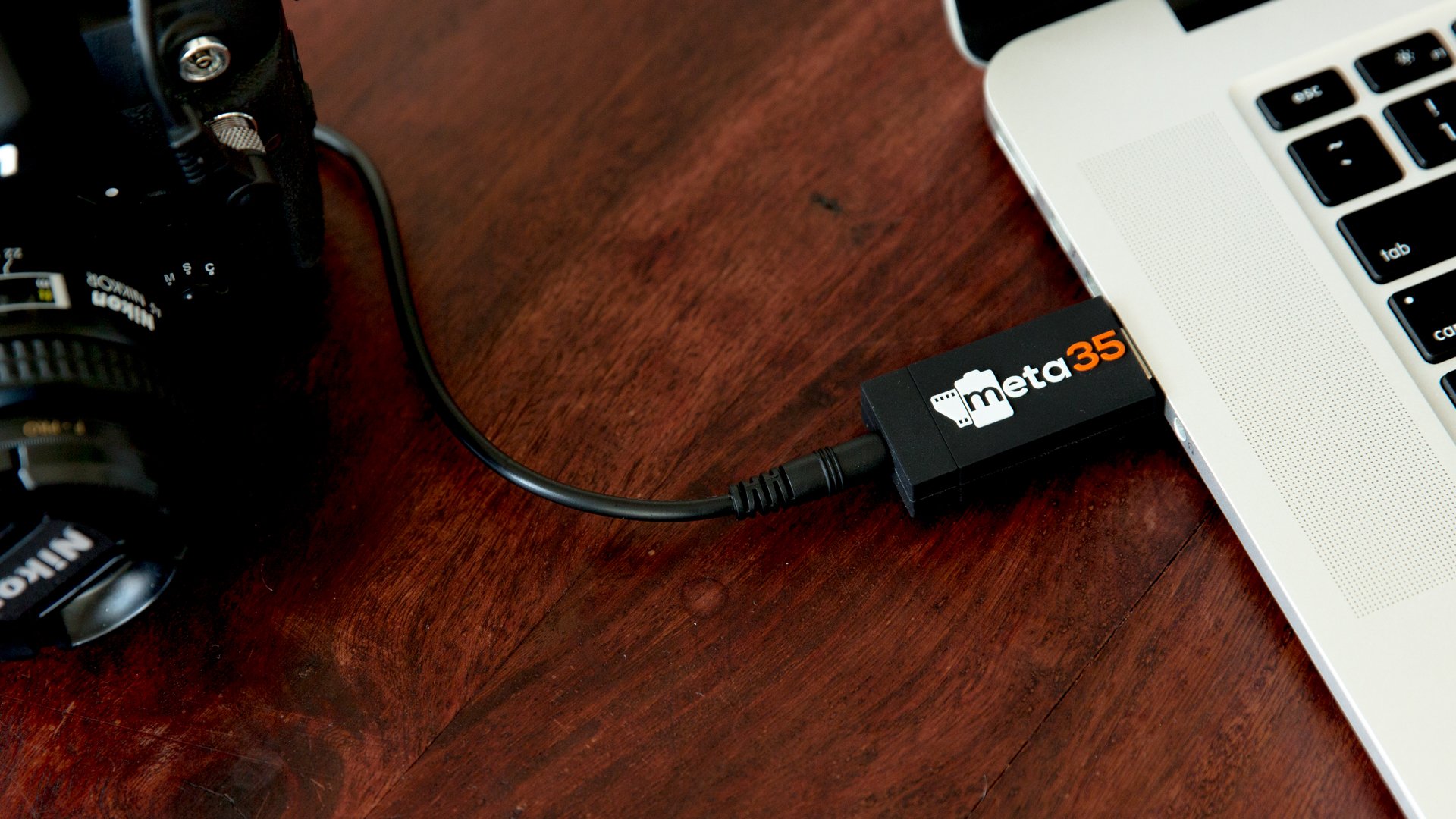 Have you ever wondered how to embed EXIF data into your film-shot and computer scanned images? Are you one of the newly enlightened 35mm film shooters recently in possession of your dream, quasi-vintage film camera (think Nikon F100, Nikon F5, Canon EOS-1V or Minolta Maxxum) – but frustrated trying to figure out how to tweak its Custom Settings exactly how you want? You may have given up, resigning yourself to thinking, “some day someone will figure this out.” Well, that someone is Promote Systems, and thanks to the software company in Houston, Texas, your wait is over. Enter meta35, a new product allowing you to extract EXIF data your camera generates, import to the computer, then embed into the specific frame of film it corresponds to. Not only that, but Meta35 allows interaction with these old, beautiful film cameras Custom Setting Menus; tweak them, then re-export to the camera. Quickly, easily, and without any cryptic cheat sheets.

About a year ago I received an e-mail from a gentleman asking if the Nikon MV-1 Data Reader was the only game in town when it came to retrieving data off the Nikon F6. The answer at the time was, unfortunately, yes – as far as I knew. For those unfamiliar with the MV-1, it’s a glorified CF card reader in a black, velvet pouch that hooks up to the 10-pin ports on the Nikon F6, Nikon F5, Nikon F100 and Nikon N90S/F90X allowing the transfer of Exif data generated by the camera (when this option is activated, as in the case of the F100) – write that data as a tiny .txt file to a Compact Flash (CF) card, then transfer that data to the computer for further use. The MV-1 is perfect for what limited functionality if performs, but there are several downsides. One is cost; at close to $240 it feels dramatically over priced for what it is. Another downside is that it’s one-directional in the sense it’s designed simply to retrieve data stored in your camera and write it to a card. During that process it deletes the data from the camera’s memory. Yet another disadvantage to the MV-1 is they’re tough to find – and will become tougher as time passes.

In the old days there was a piece of software called Nikon Photo Secretary, allowing interaction with the F5’s inner functions. I never used Photo Secretary so can’t speak precisely to what it did or didn’t do. It was released about the same time as the F5 and from the looks of things, designed primarily to interact with the CSM (Custom Settings Menu) of the F5, providing easier access to its inner secrets. Regardless, if you can even find it today, and/or a computer that’ll run it – you’d be lucky. So what’s left? 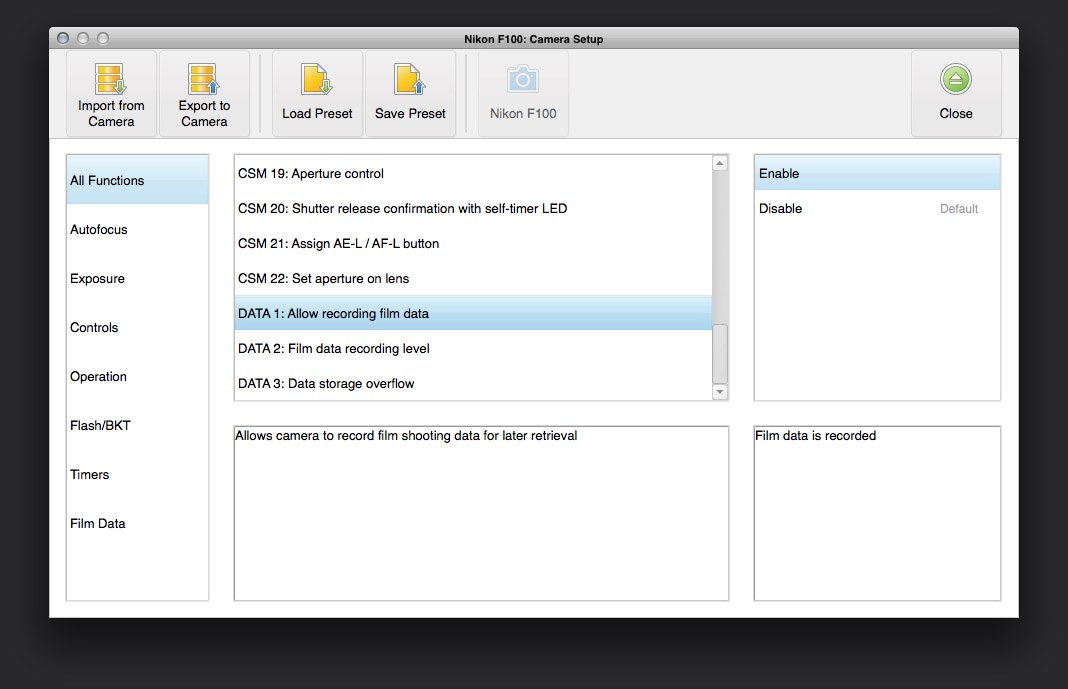 The much-loved Nikon F100 is capable of more than you think. Its default setting was to not record film data. Meta35 allows F100 users to once again interact with its Custom Settings Menu to enable this feature.

Fast forward a year to an e-mail from the same gentleman a year ago, asking if I’d be interested in trying a new product for extracting data from the F6. Enter meta35, from Promote Systems in Houston, Texas. Meta35 is a new product providing today’s film shooter with the data generated by their cameras, previously inaccessible. And in the case of a camera like the F100 where you actually have to tell the camera to record data (its default is “off”), meta35 is the only game in town allowing access to this function, buried deep in the camera’s brain to wake it up, fully realizing its potential. 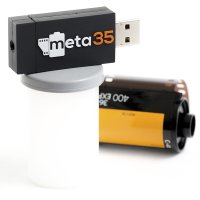 Meta35 is a software/hardware solution for not only these vintage, Nikon film cameras (F100, F5, F6, N90S/F90X), but also Canon EOS-1V and Minolta (Maxxum, Dynax and Alpha) cameras as well (please see footnotes at end of article). The software component runs on both Windows and Apple OSX as a efficiently designed, standalone application. The 2-part hardware component consists of a small cable with the appropriate connecting head for your camera on one end and standard 3.5mm jack on the other that plugs into a small adapter which connects to the computer’s USB port. Meta35 is extremely simple to use, well designed and fully functional.

Think of the camera’s data in two separate buckets:

The one-driectional MV-1 is capable only of removing (and erasing) generated EXIF data from the camera. Meta35 is bi-directional in the sense it allows you to read and write information to and from the camera. In regards to Custom Setting Menus, in the past its been difficult or impossible to access that data without some sort of deciphering key explaining what CSM function is mapped to what code in the camera. Meta35 somehow cuts through to not only decypher each camera’s CSM info, but allows retrieval, editing on the computer, then re-exporting altered CSM settings back into to the camera.

In the case of the F6, Meta35 does not allow changing CSM settings on the camera – this is simply done using the F6’s Menu on the back. But if you’re an F5, F100 or N90S/F90X, Canon EOS-1 or Minotla Maxxum shooter you’ll appreciate being able to easily read and alter each Custom Setting in the camera, then push those settings back to the camera and be ready to go. 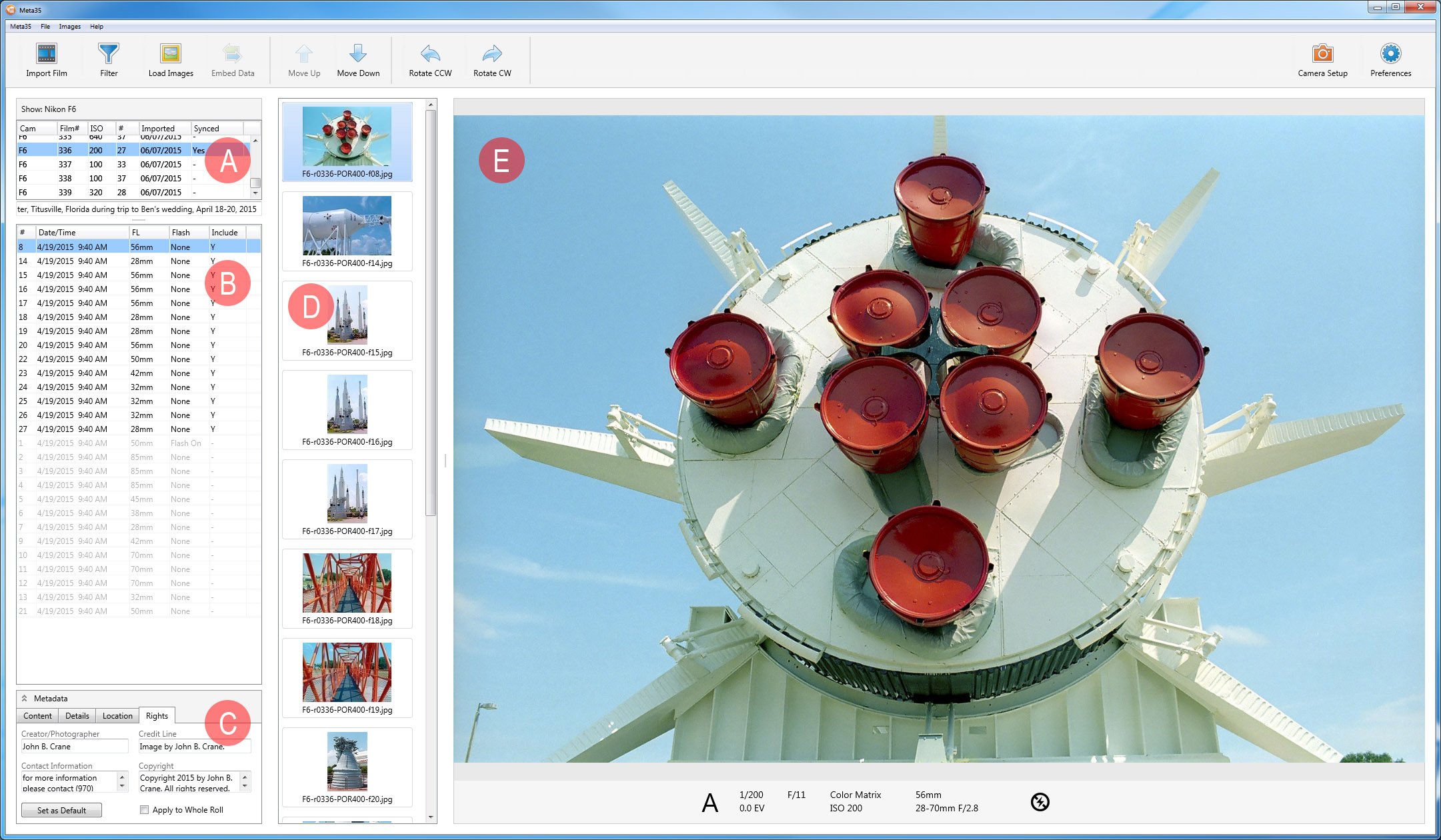 Meta35 in action. A: Roll data is imported from camera and held in scrollable window. B: Frame number containing Exif data is displayed for that roll. C: IPTC Information may be added such as title, keywords, location, date, copyright. D: Image directory window containing scanned images from roll you’re working on. E: Image preview, changes with each frame (either thumbnail in D or frame data in B) you select.

When it comes time to embedding EXIF data into your image, meta35 is more than up to the task. Here’s a quick snapshot of the process. There are also links to short, informative “how-to” videos available here.

1) Hook meta35 to the camera and turn the camera on
2) Launch the software
3) Import the Exif data from the camera
4) Locate and load the image directory you wish to work with
5) The software automatically matches the exif data frame with the proper image*
6) Enter the additional IPTC data at the bottom such as titles, locations, keywords, etc.
7) Click “embed data” button

and presto – your image now carries all the data generated when shot such as f-stop, shutter speed, time, date, camera brand/model, etc.

OK – that’s a best-case scenario. Here are a few things you’ll figure out during your use of meta35, each tied to the number above:

1) Hook meta35 to the camera and turn the camera on. Make sure when you’re finished using meta35 you physically disconnect the cable from the camera or it will eventually deplete your batteries.

2) Launch the software. No issues here. It will run on both Windows and Apple OSX computers and I never experienced a single stability issue.

*In case you’re wondering – as I was – whether meta35 can work with data already imported from the camera and living on your hard disc, the answer is yes (!)*

4 and 5) Locate and load the image directory you wish to work with. This is an important step that takes a lot for granted. Without getting into a workflow discussion, I’ll say this: for most compatible use across the board it’s best to work with JPEG images. Here’s why.

a) Though meta35 presently understands both TIF and JPEG’s, it’s more compatible with JPEG’s on both platforms. On the Apple platform there is an issue preventing the software from writing all the EXIF data to TIF files on Apple OSX. It does allow some information like shutter speed and aperture, but not other information like camera brand, camera model and some others. They’re working hard to figure this out and I have no doubt they will. But for now, use JPEG’s – especially if you’re in the Mac.
b) When you scan images from a roll of film, this process assumes a logical, sequential naming convention. I’ve written other articles on this in the past so won’t get into it again here. But if you randomly name your files willy nilly when scanning, it makes associating the proper image later with the proper frame’s EXIF data much more difficult. Meta35 uses a logical sequence-based method. It understands “frame 1” in the EXIF data – and expects you to identify “frame 1” in your image directory. Much of this is common sense – but Meta35 isn’t a mind-reader – it needs you to do your part too.
c) The good news is, once you’ve imported the image directory you want to work with, re-ordering images in the image pane is relatively simple if you’ve not been diligent in your naming conventions while scanning. It’s easy to re-order, or even omit and exclude images from syncing. It’s rare that I scan all 36 images in from a roll of film, leaving gaps between images. No worries for meta35. It allows you to either exclude the data file or the image, based on how you prefer to work.

6) Enter the additional ITPC data at the bottom such as titles, locations, etc. This is a nifty way of adding keywords, descriptions, titles to your images. In the case of the Copyright pane there’s an option to apply to whole roll, saving time of entering the same information repeatedly. Same with the time/date stamp – allowing you to time/date stamp the entire roll. It’s a bit laborious to copy and paste information across all 36 images, but it needs to be done at some point and meta35 provides the most concise and streamlined opportunity to work on a whole roll at once.

7) Click “embed data” button. As noted above, this action will embed all entered data into your images, with the exception of TIF’s on the Mac, which embeds only some of it. The image is then permanently joined to its shooting data. When you open the image in other software such as Lightroom, Photoshop, or DxO Optics the data is there. 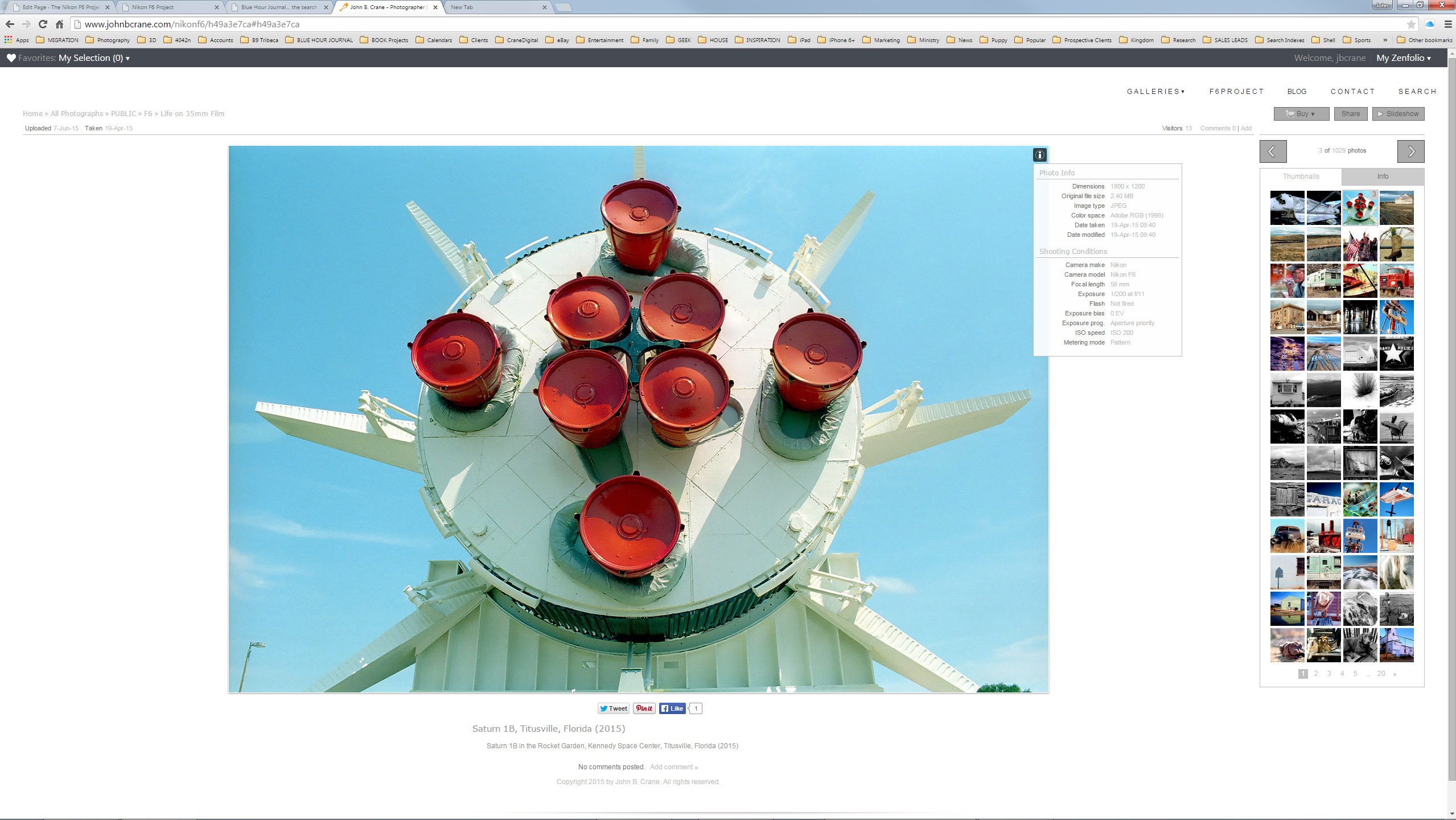 Embeded MetaData successfully fused into the image and recognized by on-line displayers- in this case, zenfolio. 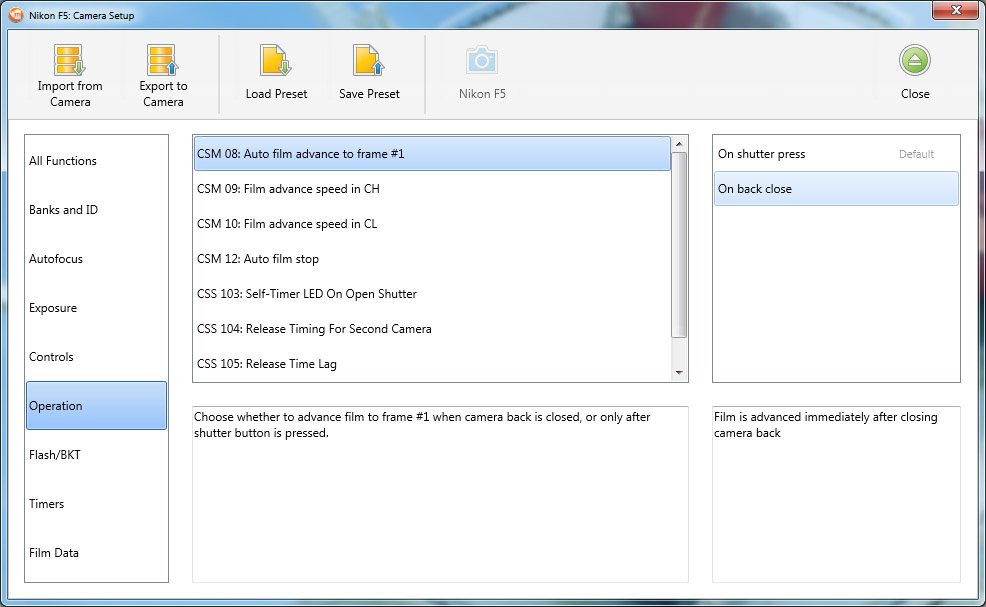 Working with the camera’s custom settings menu is a breeze with meta35. As noted earlier, when altering the F6’s Custom Settings you’ll continue to do so on the camera’s menu itself. But for other cameras such as the F5, F100 or N90X/S, meta35 makes customizing the camera’s functions a breeze. Here’s the overview:

It’s really that easy. No deciphering cryptic keys, or trying to memorize codes in the camera and what they mean. All information is clearly presented in the software as readable, easy to understand information.

OVERVIEW SUMMARY
Meta35 is a combination of software and hardware that lets photographers download shooting data from compatible cameras, embed the data into the EXIF metadata of scanned images and configure the cameras built in custom functions to optimize settings to the photographer’s needs. For version 1 software it’s robust, stable, well thought through and fully functional. It will be exciting to see where Promote Systems takes it from here.

Features:
– transfer film shooting data from the camera directly to a MAC or PC
– embed the shooting data into the EXIF metadata of the scanned images
– set up and customize camera custom functions

Meta35 retails for $149 for Nikon, Canon and Minolta versions, and is available for both Windows and Apple OSX computers. For more information please visit Promote System’s web site at meta35.com