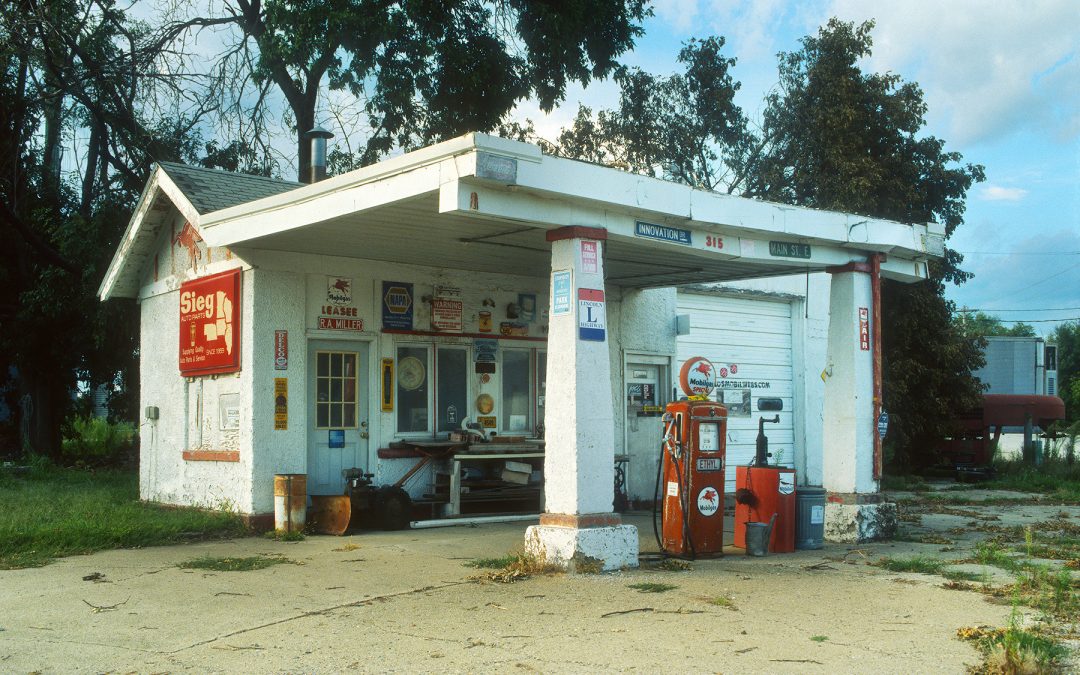 Executive Summary: Don’t be afraid of Kodak Ektachrome E100. While true – it’s not Velvia or Provia, it absolutely stands on its own merits as an excellent option for chrome film shooters looking for a true-to-life color, excellent resolution & sharpness and virtually grain free film. Paired with the F6’s virtually infallible meter, you can not go wrong with E100.

Trip number 4 this year between Colorado and Illinois & back again saw more time on the Lincoln Highway. Picking it up at the (Mississippi) River, entering through Clinton, Iowa and traveling the entire length of the state to Missouri Valley, IA took about a day. Following many of the original route loops off US30 extended the day considerably, but that’s where the good stuff is. In for a penny, in for a pound.

After taking a hiatus from color for a spell I’m enjoying chrome film again. This post is geared towards presenting a range of E100 colors. A good stash in the fridge purchased upon release a while back was perfect for this trip before it expired.

This trip picked up the Lincoln Highway in Geneva, Illinois, and continued west on 38, also known growing up as Roosevelt Road.

First stop: in Franklin Heights, Illinois to photograph the official headquarters of the Lincoln Highway. A sweet, older couple emerged from the diner across the street and we had a nice conversation. “The problem with Illinois,” said the husband, “is Chicago.”

There’s been a good bit of trouble in Chicago these past few weeks. The days I was down town weren’t bad – actually pleasant. Hardly any traffic on Michigan Avenue (foot or automobile) after riots and looting turned the beautiful store fronts into what looked like an aisle in HomeDepot, with plywood haphazardly thrown up to protect bashed-in store fronts. I’ll stay out of the politics of the situation and offer this: the extreme response to social injustices may have had something to do with pent up rage over the already tiresome pandemic.

In front yards across the western suburbs yard signs brazenly proclaimed “Pritzker Sucks.” Governor JB Pritzker has done his best to keep the Covid situation under control in Illinois, but apparently has ruffled a few feathers in the process.

At the Mississippi River, near Fulton, Illinois evidence of the recent Derecho first became apparent. That previous Monday the storm washed through eastern Iowa into western Illinois causing tremendous damage.

For those who don’t know, a Derecho is an uncommon weather occurrence characterized by a straight-line (derecho means straight in Spanish) of wind storms that can reach tornado and hurricane force and bring intense rains and flash floods. The damage to western Illinois and eastern Iowa was substantial. In many cases entire fields of corn were lain flat, the stalk bent over at ground level all but destroying what must be thousands of acres of Iowa corn. That evening local news reported the state has filed for nearly $4 Billion of federal aid. Power crews working along miles of highway from Clinton, IA west were trying to restore power – nearly a week after the storm had come through.

A heavy heart was had for so many Iowans. In the midst of struggling through the Covid situation to now have to deal with this new natural disaster. I’m sure many were asking what was next. But Iowans are a tough breed and they’ll ban together and be alright.

A few months ago passing through Beaver there was an old building, uninhabitable but interesting enough to photograph from the road. This time through, it was completely gone – no sign of it what so ever. A reminder that if you see something of interest don’t wait until next time to shoot it. Seize the moment – it may not be around for long.

Pushing a little to hit Grand Junction again for another try at R.A. Miller’s Mobil station found me arriving just before last light disappeared behind the clouds. Squeezing off a few frames before the evening’s gray set in brought out some wonderful color in Ektachrome.

Photographing these old filling stations has become a thing with me. So much color and historical ephemera… they’re a delightful reminder of a completely different time in our history, typifying the classic American road trip experience. Below, from a few months prior, passing through Belle Plaine, Iowa. Gary Hevalow graciously allowed me inside to make some images of the time capsule that is Preston’s Station.

This night spent in Carroll, Iowa was more comfortable than a few months ago, sleeping in a WalMart parking lot. The Covid situation being a little less unpredictable these days I felt perfectly safe staying in hotels on this trip.

Like all other films – especially chrome films – to the best of its ability Ektachrome E100 will faithfully reproduce what you point your camera at. If you point it at bright, harsh light – you’ll be disappointed upon reviewing your films. If you point it at beautiful, colorful, light and expose properly for it, you’ll smile.

One thing I’ve found with E100 is the slightly dull nature of blacks. This is easily remedied in Photoshop using a levels adjustment layer, often the first adjustment layer when I’m editing. Setting the black point in scanning can also punch it up, but I prefer the Photoshop method because it allows more latitude.

Overall I’ve been satisfied with Ektachrome E100. On the litebox it lacks the punch of Provia or Velvia. But for scanning it holds up well, providing plenty of useable data to work with in editing. When properly exposed its ability to preserve shadow detail is better than the aforementioned films.

Color properties are largely neutral, true-to-life representation, though I’ve found color bias leans towards warm, occasionally requiring a color adjustment layer in Photoshop. It’s plenty sharp, with plenty of resolution. And it’s fresh – as in, not expired. So you know you’re approaching a scene with a predictable, solid medium – not an experiment (which can be fun, but…).

Having just purchased another brick, there will definitely be more Ektachrome E100 exposed in the F6 this year. I don’t know if it will be the 500th roll or not, but it’s certainly in the running. I have 6 rolls to make that decision.