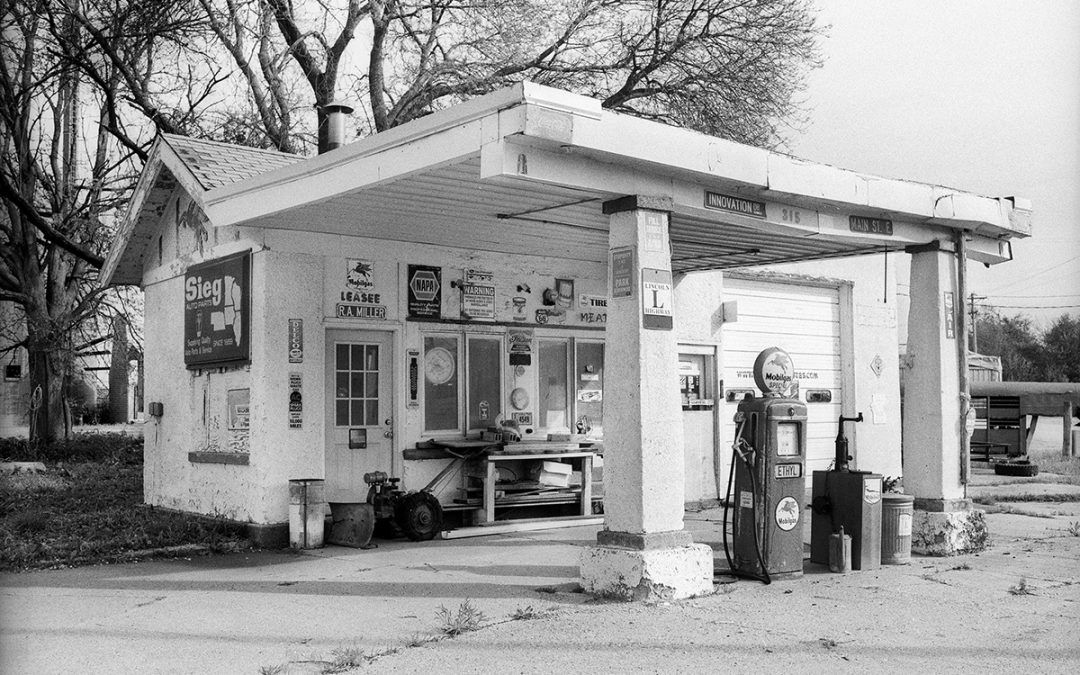 Traveling back and forth between Colorado and Illinois for as many years as I have, getting off the Interstate and driving two-lane back roads instead is always a welcome diversion. Most of the time I’m in no particular hurry, allowing me to wander slowly through the Mid-West matrix of gravel roads at low speeds, looking for anything of interest causing me to stop.

This past Spring amidst the Covid-19 outbreak I found I’d rather be in the car than cooped up in the house. Here are a few photographs from the three trips made along the Lincoln Highway between early March and early June – all with a specific purpose, by the way – to either retrieve my son from college, or return him to college in Chicago.

The ‘romance’ of being on the road came to a crashing end this night in Carroll, Iowa. Having found a perfect camp site a few miles earlier – only to learn it was closed due to Covid-19 – as were all Iowa campgrounds – I was forced a few more miles down the road before stopping for the night. So what do you do in a WalMart parking lot all night? Make photographs, of course.

Though U.S. 30 is today’s closest equivalent to the Lincoln Highway, the real joy of the true Lincoln Highway experience comes from following the spurs. Often, along U.S. 30 there will be signs marking the Lincoln Highway route. More often then not these signs point the traveler down a dirt road with no obvious incentive for the casual traveler to detour from their route. But it’s on these detours – that always wind back to U.S.30 somehow (though often times it takes a good bit of head scratching and backtracking) – the true lore of the Lincoln Highway is visible.

One such detour was around Scranton, Iowa one morning. Early morning light was soft and beautiful, and traffic was light. Birds chirped along the field each time I stopped the car to make a photograph. At one point a ring necked pheasant, hunkered down in the grass waiting to determine my intentions – exploded into the sky, the suspense finally becoming too great for him.

Coming upon these old, abandoned establishments along the road is an eerie experience. Long-ago forsaken, they have lain dormant for years. Or have they really? Approaching with caution should one of today’s weary travelers be seeking temporary refuge for the night within the confines of its walls is always a good idea.

R.A. Miller Mobil Station in Grand Junction, Iowa was such a pleasant and wonderful surprise. It was early morning and I was just finishing off the last of my coffee when I rolled into the empty streets of Grand Junction. As usual, I stopped in the town center and climbed out to stretch my legs. Wandering around the empty streets I found some wonderful, old brick buildings and other interesting signs and markers. When done I saddled up and continued on, only to bring the car to a sudden stop not 2 minutes later when this old filling station appeared, hidden from view while exploring moments ago. Once again I stopped the car, absolutely giddy with excitement and spent another hour exploring this scene from various angles. Dogs were barking, cars beginning to drive by with drivers smiling and waving as I again and again hoisted the F6 to my eye – often times making virtually the same photograph as the moment before. Making sure I paid adequate attention to this landmark was all that was on my mind.

Earlier in the year during another trip along the Lincoln Highway I had the good fortune to meet Gary Hevalow, the now benefactor of a similar landmark, Preston’s Station in Belle Plaine, Iowa. You can read more about that here. These old filling stations strategically placed about the highway are a special focus for me – in what ever form they occupy today. So back in March, the opportunity to be invited in to photograph the interior was a special treat.

On this trip I followed the Lincoln Highway through Aimes, Iowa, where finally in the name of expediency I picked up the Interstate again. I encourage anyone who’s out traveling to take full advantage of the opportunity to move slowly if you can, and not be in a hurry to get from one place to another all the time. There are surely times this isn’t possible. But there are times when adding a day or two onto an existing trip to explore the less-traveled routes is quite rewarding.

Arriving in Chicago is usually the end of the line, where there is always plenty of visual interest to finish off a roll. This old CTA station, nearly invisible beneath the L-Platform at Franklin and Chicago Ave. impressed me with its early, sturdy brick construction standing against the pouring rain.

All images made on Ilford Delta 100, developed in Ilfotol DDX developer, 1:4, by the book. Often times the humble Nikkor 50mm f1.4D with a Nikkor Y48 Yellow filter was used.